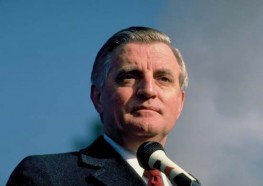 Walter Frederick ""Fritz"" Mondale (born January 5, 1928) is an American Democratic Party politician who served as the 42nd Vice President of the United States (1977–1981) under President Jimmy Carter, and as a United States Senator from Minnesota (1964–1976). He was the Democratic Party's presidential candidate in the United States presidential election of 1984. At more than 34 years, he has had the longest retirement of any Vice President.Mondale was born in Ceylon, Minnesota, and graduated from the University of Minnesota in 1951. He then served in the U.S. Army during the Korean War before earning a law degree in 1956. He married Joan Adams in 1955. Working as a lawyer in Minneapolis, Mondale was appointed to the position of attorney general in 1960 by Governor Orville Freeman and was elected to a full term as Attorney General in 1962 with 60% of votes cast. He was appointed to the U. S. Senate by Governor Karl F. Rolvaag upon the resignation of Senator Hubert H. Humphrey consequent to Humphrey's election as Vice President. Mondale was subsequently elected to a full Senate term in 1966 and again in 1972, resigning that post in 1976 as he prepared to succeed to the Vice Presidency in 1977. While in the Senate, he supported consumer protection, fair housing, tax reform, and the desegregation of schools. Importantly, he served as a member of the Select Committee to Study Governmental Operations with Respect to Intelligence Activities (""Church Committee"").In 1976 Carter, the Democratic presidential nominee, chose Mondale as his vice presidential running mate in the forthcoming election. The Carter/Mondale ticket defeated incumbent president Gerald Ford and his Vice Presidential running mate, Bob Dole. Carter and Mondale's time in office was marred by a worsening economy and, although both were renominated by the Democratic Party, they lost the 1980 election to Republicans Ronald Reagan and George H.W. Bush.In 1984, Mondale won the Democratic presidential nomination and campaigned for a nuclear freeze, the Equal Rights Amendment, an increase in taxes, and a reduction of U.S. public debt. Mondale was defeated by President Reagan in one of the biggest landslides in US history, gaining electoral votes from only his home state of Minnesota and the District of Columbia.After the election, Mondale joined the Minnesota-based law firm of Dorsey & Whitney and the National Democratic Institute for International Affairs (1986–93), and was credited with successes in Poland and Hungary. President Bill Clinton appointed Mondale United States Ambassador to Japan in 1993; he retired in 1996. In 2002 he ran for his old Senate seat, however he was defeated. Mondale then returned to working at Dorsey & Whitney and remains active in the Democratic Party.