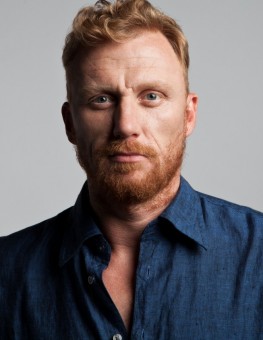 Kevin McKidd is known as a Scottish-American actor, and director. He is most famous for being the lead on the NBC series Journeyman. He also has notable roles on the medical drama, Grey's Anatomy and the HBO hit series, Rome.

Kevin McKidd was born on August 9, 1973 and he was raised in Elgin, Moray, Scotland. He wanted to be an actor as far back as when he participated in school plays at around the age of six or seven. He dropped out of Edinburgh University where he was studying architecture. He changed career paths to take up a drama course at Queen Margaret's College,

Kevin had his first big break in entertainment when he got his first TV role in 1996, playing Father Deegan in the British comedy sitcom "Father Ted." This prompted the role that would change his life forever. In the global hit "Trainspotting" directed by Danny Boyle, Kevin started to become a fan favorite among the independent movie scene. The role allowed him to get guest spots on many British TV shows.

He got the attention of acclaimed director Ridley Scott in 2002. Ridley cast him against Orlando Bloom and Liam Neeson in his war epic "Kingdom of Heaven." After this film, Kevin got further work in movies including "Nicholas Nickleby" and the "Silence of the Lambs" prequel called "Hannibal Rising."

He got a huge ole as Lucius Vorenus in the HBO series "Rome." The show got huge recognition because of its realistic portrayal of the Roman Empire. The show lasted only two seasons but is still beloved to this day.

Kevin McKidd has dated notable women in his life like Jessica Capshaw and Sara Ramirez. He was married to Jane Parker from 1999 to 2016 and he has two children from their marriage. He has a son named Joseph who was born in 2000 and a girl named Iona who was born 2002.