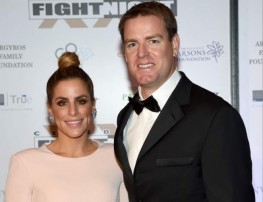 Shaelyn Palmer, born as Shaelyn Fernandes on 8th July 1980, is a former football player and wife of Carson Palmer, a NFL player. She is more known for his husband who has been a reputed football player, and is always in the news for his outstanding performances and injuries that he suffers.

She is herself a former soccer player who played for the women’s team in the Southern California University. She had been the main starting goal custodian, and her team won many championships and tournaments during her long and illustrious career. She travelled even to Japan with her football team, and played against Japanese teams.

Her personal life is famous and illustrious as she married Carson Palmer. She spent her early life in San Jose, and joined Presentation High School. Her father’s name is Chris Fernandes who had been a baseball player, and played at Santa Clara. It was perhaps her father, that Shaelyn was attracted towards sports.

After her High School education, she attended Southern California University. It is here at the University that Shaelyn and Carson first met, and took part in the Freshmen Athlete orientation together. Carson proposed to her in 2003 in a very dramatic and romantic manner. It was in a restaurant where the big proposal came about.

Carson had surprised Shaelyn by inviting her parents to the restaurant without her knowledge about it. They married on 5th July 2003, and are happily married for over 15 years now. There is no news; she divorced her husband as yet. They have together twins; a daughter Elle, and a son Fletch, born in 2009. Carson himself disclosed the birth of their twins.

Carson is not amenable to trips outside, and would like to play video games at home for hours together. It is the persistence of Shaelyn that he stirs out of his house.

Shaelyn studied in High School and started playing football there. She had performed admirably during her stay at the High School, and had a dominating career. She kept goal for four years at the school, and had an outstanding 78-4-5 record, two CIF Central Coast Section Championship, and four titles in the league. She had been the most valued player in junior and senior levels.

She went to Japan along with the high school team to play against high school teams of Japan. The team won national championship three times, and regional titles five times. She played in regional and state levels, too. She did not win Heisman Trophy like her husband, but was no pushover.

In the university, also, she played women’s soccer. She had been the main goalkeeper of the women soccer team of Trojans. She served as part-time or full-time goalkeeper with Trojans for three seasons.

It was perhaps their interests in sports that Carson and Shaelyn were attracted towards each other, and made a happy home. There is no mention of her net worth in her biography, although her husband has a huge net worth of $50 million.