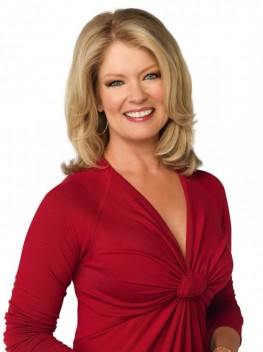 Mary Hart, born as Mary Johanna Harum on 8th November 1950 at Madison, South Dakota, has been a U.S. television personality. She had been the host of the TV show “Entertainment Tonight” for over 29 years from 1982 to 2011. She had also been chosen Miss South Dakota in 1970.

Mary Hart spent her early life in Sioux Falls, South Dakota and Denmark. That is why; she knows both Swedish and Danish languages. She was born to Dorothy Harum and Robert Harum, and has two male siblings namely David Harum and Michael Harum. She participated in the Miss America pageant in 1971, and reached up to the semi-final level. She did her graduation from Augustana Academy and Augustana College in 1972.

She lived at Trousdale Estates near California with her husband, Burt Sugarman, whom she married on 8th April 1989 before relocating to Ritz-Carlton Residences in Los Angeles. They have a son named Alec Jay Sugarman who resembles with his mother and is employed as legislative assistant. Previously, Hart had married Terry Hart in 1972 whom she divorced in 1979. She is leading a happy married life.

Before she started her professional career, she participated in various beauty contests. She won the Miss South Dakota title in 1970, and came to the semi-final level at Miss America pageant in 1971. She started her career as a teacher, and later got the chance to anchor the TV show Entertainment Tonight which made her famous.

She was associated with a number of TV channels, and these include KMTV, KSFY-TV, and KFOR-TV. But, it was after she co-hosted Entertainment Tonight that she became known and popular.

During the show, her legs came to be noticed, and were considered to be the best. Her legs had an insurance of $1 million. This adulation gave her an opportunity to become a model, and she worked with Hanes in 1987 to promote pantyhose products. She also tried to make a mark in the field of singing. He started her singing career with Golden Nugget Hotel and Casino.

But her singing career did not go much far as her voice was not considered up to the mark. Also, she worked as a timekeeper in a match of Hulk Hogan with Andre The Giant. She got Daytime Lifetime Achievement Award in 2017. As per her biography, her net worth is estimated at $10 million.