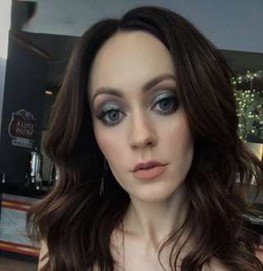 Sarah Orzechowski is a noted social media personality and wife of American singer Brendon Urie, who is best known as the lead vocalist of Panic! at the Disco. Panic! at the Disco has released six studio albums with Urie as lead vocalist. Sarah Orzechowski was born on February 23, 1987. She is active on social media and has more than six hundred thousand followers on Instagram, where she is noted for discussing skincare. Sarah promotes all natural, non-toxic, skincare products and also does beauty demonstrations.

Sarah’s husband, Brendon, identifies as heterosexual but admits to having experimented with men. In July of 2018 he talked about being married to Sarah and how much he was in love with her, but also described himself as pansexual. Pansexuality allows for romantic, emotional, or sexual attraction towards people regardless of their sex or gender identity; pansexuals often refer to themselves as being gender-blind because they believe gender and sex are not determining factors in sexual attraction. The first time Sarah and Brendon met, she was in a relationship with someone else, but the next time they were introduced, Sarah was single and the couple started dating. They were engaged in September of 2011 and married on April 27, 2013.