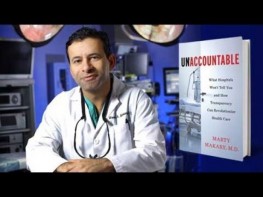 Martin “Marty” Makary is an American surgeon and New York Times best-selling author and is a frequent television medical commentator for NBC and FoxNews. Makary has written articles for The Wall Street Journal, TIME, Newsweek Magazine and CNN. He practices advanced laparoscopic surgery at the Johns Hopkins Hospital and teaches health policy at the Johns Hopkins Bloomberg School of Public Health. Makary is known as an international expert in patient safety and served in a leadership role at the United Nations World Health Organization for the Safe Surgery Saves Lives initiative. In 2013, Makary was named one of the most influential people in healthcare by Health Magazine.Makary is an advocate for transparency in medicine and common-sense solutions to healthcare’s problems, such as The Surgical Checklist, which he developed at Johns Hopkins, and which was popularized in Atul Gawande’s best-selling book Checklist Manifesto. In 2013, Makary testified to the U.S. Congress on the need for more transparency in healthcare, including access of data to medical researchers, repeal of the SGR, and patient-centered research. Makary has argued that professional physician associations are in the best position to define and endorse the validity of quality metrics in healthcare. In 2009, the American College of Surgeons recommended Makary to President Barack Obama for the position of Surgeon General of the United States.