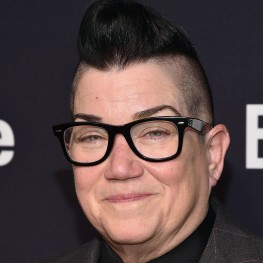 Lea Delaria is known as an American actress, singer, comedian, and professional lesbian. She is most famous for her role on the Netflix prison comedy drama, Orange is the New Black.

Lea Delaria rose to fame with her two time, SAG Award winning, breakthrough role as 'Carrie 'Big Boo' Black' in the Netflix hit comedy series "Orange is the New Black." DeLaria's multi-faceted career as a humorist, actress and jazz musician has spread over decades well before she hit the mainstream audience with her talent.

Lea holds the honor of being the first transparently gay comic on TV in America which prompted many Television and Film roles depicting Police Lieutenants, PE Teachers and the Lesbian who improperly hits on straight ladies. She has had an impressive list of TV credits to her name including "Californication", "One Live to Live”, "Will and Grace", "Friends", and "Matlock". She has also been in popular movies like Cars 3, First Wives Club, and Edge of Seventeen.

Lea was the featured vocalist at the 50th Anniversary of the Newport Jazz Festival, and has performed in some of the most famous music venues on the planet including Carnegie Hall, Lincoln Center, the Chicago Symphony, Hollywood Bowl, The Royal Albert Hall and the Sydney Opera House.

Lea DeLaria and Chelsea Fairless were introduced to each other when DeLaria's famous co-star Emma Myles, who plays meth head Leanne Taylor on their show felt that they would be a good match. Myles has been good friends with Fairless since they attended secondary school.

Lea was planning to get married to her life partner Chelsea Fairless in a ceremony that would have been hosted by acclaimed lesbian actress, Sandra Bernhardt. Sadly, Lea announced that she and her better half of four years had parted ways and were no longer in love.

DeLaria shared an Instagram photo the couple as David Gest and Liza Minnelli, standing next to Michael Jackson and Elizabeth Taylor. The description of the Instagram post explained their separation, “Apparently this was an eerily prophetic choice of engagement photo as our relationship has since gone the way of David and Liza, with one small exception: our split is amicable. Please exclude us from the tragic and basic celebrity breakup narrative.” “We were happy together for four years and will remain in each other’s lives. In fact, we look forward to finding new ways to torture each other.”