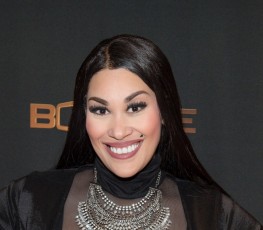 Keke Wyatt is an extremely acclaimed singer by profession who has released songs in the genre of contemporary R&B. She is also a songwriter along with a drummer who has worked with many famous music artists.

According to her biography, Keke Wyatt took birth in the city of Indianapolis which is situated in the US state of Indiana, on the date 10th March 1982, with the name Ke'Tara Shavon Wyatt given to her. Her father, Keever Wyatt II, was a great singer and used to play the organ while her mother, Lorna Wyatt, was also a singer/vocalist. The singer belonged to African-American ethnicity and she grew up in a family which dedicated their lives to gospel music. '

Along with her four brothers, she took to music at a very young age of 2 and she spent most of her childhood learning the way around secular music despite her religious upbringing. Keko attended high school in Indianapolis where she was an active member of the school’s wrestling team. She got married to Rahmat Morton at the age of 18 who was her manager but the marriage failed and they got divorced in the year 2009 because of the allegations of domestic violence against Morton. The singer again got married to Michael Jamar, who was a minister, in the year 2010, but their marriage also ended up in a divorce filed in the September of 2017. She is the mother of nine children, 3 children with Morton and the others with Jamar.

Keke Wyatt took her first steps for making her career in singing when she was very young and she got the opportunity to record her first song named “What If” which was released in the gospel album compilation when she was 10 years old. As her name went through the music industry she started following classes given by Steve Huff who looked for labels for her to sign.

The major breakthrough in her singing career occurred when she launched her first hit single with the famous singer, Avant which eventually landed her the opportunity to sign a contract with the MCA labels to release her solo album. The singer started recording and her first album named “Soul Sista” came out in the year 2001 which hit the top charts and was at the 5th position on the list of ‘Billboard 200’. Wyatt gained international recognition through the album as it sold over a million copies all over the globe.

In 2004, she changed her label to the Cash Money Records ad she released another album named “Emotional Rollercoaster” in the year 2006 under them. The album featured the song “Put Your Hands on Me” which hit the number 1 position on the list of the most listened to songs of the year. After that, her success in the career of music rose quickly and she released two more albums, “Ghetto Rose” and “Unbelievable” by 2011. She even made a presence in a theatre production where she performed the lead role. Her recent album named “Countrified Soul” released in the year 2017. Keke’s net worth is estimated to be around 4 million US dollars.