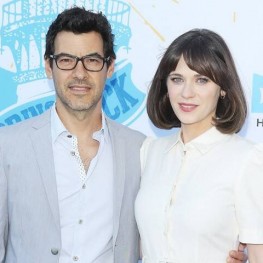 Zooey Deschanel is known as an American actress, model, and singer-songwriter. She is most famous for her lead role in the TV show, The New Girl.

She went to Northwestern University, however, chose to drop out of school and start her career as an actress. In the wake of launching a career in musical theater, she went to 'French Woods Festival Of The Performing Arts'.

She took advantage of her first guest part in 'Veronica's Closet', a network show and after that made her motion picture debut in 'Mumford', in 1999. That year, she appeared in the music video of 'She's Got Issues' for 'The Offspring'. All through her starting years, she played a wide display of supporting parts in a couple of films including 'Hyper', "Give up" and 'The Good Girl'.

In 2005, she played the part of "Trillian" in 'The Hitchhiker's Guide to the Galaxy', which is the film version of a science fiction novel. In 2006, she completed four episodes for the TV show 'Weeds'. That year, she has accepted the part of the artist, 'Janis Joplin' in her own film 'The Gospel According to Janis'. In 2009, she appeared in perhaps her best motion picture yet, '(500) Days of Summer' and contributed to the soundtrack of the film.

Zooey married her sweetheart Ben Gibbard in the year 2009 after dating for quite a while. The couple was going well as husband and spouse yet, unfortunately, their close relationship and marriage reached an end after some significant problems. The couple isolated and experienced the process of separation in 2012.

She then started a romance with Jacob Pechenik. She has two children, her first one is a little girl named Elsie Otter Pechenik. She was pregnant in mid 2017 and brought forth her subsequent child, Charlie Wolf Pechenick in May 2017.

In September 2019, Zooey Deschanel ventured out solo, only a day after news broke of her romantic sentiment with Property Brothers star Jonathan Scott. Deschanel, who declared her split from spouse Jacob Pechenik on Sept. 6, was seen grabbing supper in Manhattan Beach, California by herself.