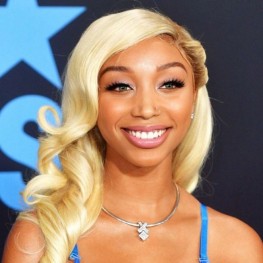 Zonnique Pullins, born as Zonnique Jailee Pullins on 20th March 1996 in Atlanta Georgia, is a U.S. R&B singer, and television personality. She had previously been associated with OMG Girlz as a member, and is famous and popular for her playing a role in the T.I. and Tiny, a Realty show depicting family hustle for over five years between 2011 and 2017. She is more famous as Miss Star or Niq Niq Star. She also released a song entitled “Pretty Hustle” working as solo artist.

She is born to her mother Tameka Harris, and has a stepfather named Clifford Harris. Her mother and father had separated while she was quite young. Later, her mother re-married. She is one among four male and three female children of her parents. Her brothers’ names are Messiah, King, Major, and Domani while the two sisters are Deyjah and Heiress.

She has been the daughter of a Grammy Award Winner and singer mother, and was brought to the lime light of the music world by her mother at an early age. Being born in a music talented family, Zonnique had a deep interest in music, and aspired to become a singer from his very childhood. Her mother was her guide and offered her the platform for her career launch.

She dated Zoey Zuko, a rapper, first, but had a break up with him. Now, she is in a relationship with Damian Swann, an NFL Player. However, she has not married as yet, and hence, has not divorced anyone.

Zonnique was associated with “OMG Girlz” along with co-stars and singers Bahja Rodriguez and Breaunna Womack. They together produced such popular songs as “Ain’t Nobody”, “So Official” “Haterz”, and “Gucci This (Gucci That)”. These songs became very popular and they gained a large fan base. In 2011, she also performed in the Scream Tour: Next Generation, and it further boosted her popularity among her audience. After the disbandment of the group “OMG Girlz” in 2015, her career continued unabated as solo performer. While other members of the group got an opportunity to perform in the “Scream Tour: Next Generation”.

Also, Zonnique had been making forays into TV shows. She worked in the “T.I. & Tiny: The Family Hustle”, a realty show. The theme of the show hovered around her stepfather, mother, and her siblings. The show was on the exhibit between 2011 and 2017. The disbandment of the group “OMG Girlz” in 2015 was sudden and unexpected as the group had been growing in popularity, and gaining success.

After the disbandment of the group, she proceeded on a solo career, and in June 2015 produced “Nun For Free”. There came the release of three other songs namely “My Nigga” “Cool Kids”, and “Can’t Trust Them” in that very year. In March 217, she further produced her first EP “Love Jones”. As per her biography, her illustrious career has been very rewarding as her net worth is estimated at $100 thousand.