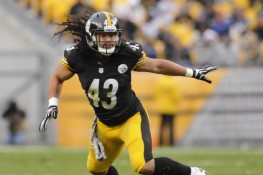 Troy Polamalu used to be a professional American football player who represented the Pittsburgh Steelers for a span of eleven years and took the team to great heights.

The talented and strong Troy Polamalu was born on the 19th of April in 1981 in California. As his unusual surname suggests, Polamalu belongs to the Samoan descent. At a mere age of eight, Troy insisted his parents so that he could live in Oregon with his aunt and uncle. Thereinafter, Troy grew up in Oregon playing and practicing football during his school days. He graduated from Douglas High School in Oregon.

Troy Polamalu is an avid and erudite Christian which is the reason why he, along with his wife, decided to convert to Orthodox Christianity. Troy loves to live a spiritual and religious and has stated in many interviews that his peace of mind achieved through spirituality has helped him stand out in matches.

Religion has had an impact on Troy to such an extent that even his sons are named after two renowned Christian saints namely Saint Ephraim and Saint Paisios. During the football season, Troy toils hard in Pittsburgh where his club is based and during the off-season, he loves to spend his time in California with his family.

Like every other athlete, Troy too loves to enjoy life by playing the piano, surfing and gardening. Troy has segregated his professional life with his personal life very well which is why despite his bold and intimidating outlook, he happens to be an altruistic family man.

After leaving an impact on his high school football pitch, Troy Polamalu was given a scholarship by the University of Southern California to play for their college football team. He thrived in his college career playing as a linebacker. He registered 2 forced fumbles, 12 tackles and 2 sacks during his college career which was fleeting because of an unfortunate injury.

After a successful freshman season at the university, Troy performed even better in his freshman sophomore and junior season. For his stand out performance, Troy won some prestigious accolades during his college career which included the MVP award. He was chosen by Football Writers as a first-team All-American.

Throughout his career, Troy has delivered an outstanding performance no matter where the stage was set. When in high school in Oregon, he was great and then in college in California, he was even better. But his success knew no limits until then as Troy began playing professionally for the Pittsburgh Steelers in 2003. He was picked in the very first round of the NFL Draft in 2003 and the rest, as they say, is history. T

roy gave many outstanding performances over the course of eleven years of playing professionally. His Super Bowl debut was in 2006 when his team thrashed the Seahawks by a scoreline of 21-10. In no time, Troy became the highest paid defenders in the league and as of now, his net worth is a whopping $30 million.