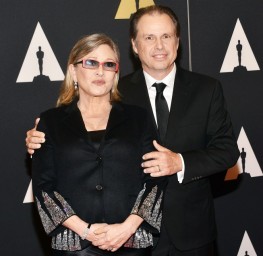 Todd Fisher is a documentaries and television film producer, a cinematographer, a director and American actor. He is a son to Eddie Fisher, a singer and to actress Debbie Reynolds. He is a brother of Carrie Fisher.

He started his career in sound engineering and architectural design. He has experience in building and designing sound stages, television facilities and recording studios. Fisher was also working like a business executive. He is a former CFO, president and CEO of Debbie Reynolds Hotel &Casino, Debbie Reynolds Resorts and Debbie Reynolds Management Company. He is a curator and CEO of Hollywood Motion Picture Museum which is found in Debbie Reynolds Studio in the city of North Hollywood. He has a ranch at Creston, in California.

From his biography, Todd Fisher was born in the city of Burbank of California. Her grandparents from his father’s side are Jewish-Russian immigrants while on her mother’s side; they were English and Scots-Irish Protestants.

Fisher studied at Beverly Hills High school and graduated in the year 1976. He continued his studies at Southern California Institute of Architecture based in Los Angeles.

Fisher gave his life to Jesus in the year 1980s and he was ordained like a minister in the year 1982. After his ordination, he became the founder of Hiding Place Church together with Henry Cutrona, a musician of Christian Country rock in the Gentle Faith Band. They started to meet in DR studio but they outgrow the place and they started to meet at Beverly Hills Theater. By 1986, the church had at least 1,000 Sunday attendees and they relocated to meet at Emerson Middle School.

In the year 1981, Fisher got married to Donna Freberg who was his high school girlfriend. The two gave birth to a daughter called Stan Freberg. After the divorce, then he married Christi who was a wife of Johnny Rivers. Christi died in 2008 and Fisher married again actress and a business woman named Catherine Hickland.

After the death of his sister Carrie Fisher, their mother also died because of a stroke. Even if it was said that she died because of broken heart, the true is that she wanted to be with his daughter and she said that she was not happy, not being able to see her daughter coming back. Carrie left a daughter called Billie Lourd and they held a joint funeral for her mother and grandmother. The family was sad that they are gone but happy that they are together in eternity.