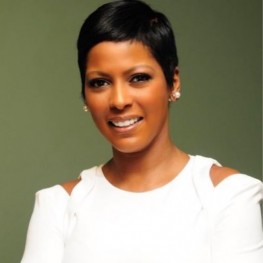 Tamron Hall, a reporter, an anchor and a TV personality by profession, came to life on September 16th 1970. She is a Native American and was born to her parents in Luling, Texas, U.S. Tamron had an active interest in journalism and reporting since she was very young in age and because of this reason she did her studies in journalism. She did her graduation from Temple University with Broadcast Journalism as specialization and immediately after passing out of her graduation college, she started reporting for a news channel.

Tamron is known for her beautiful looks and charming personality. She has had a boyfriend in the past with the name Lawrence O'Donnell, who is also a journalist by profession. Both Tamron and Lawrence have been dating for many years now and there has been news very recently that both of them would be getting married soon and the boyfriend girlfriend relationship would turn into a husband wife relation very soon.

According to her biography, Tamron started her journalism career immediately after passing out of her graduation college. She started working with a news channel with the name WFLD-TV wherein she started covering political news. She gained much popularity there as she interviewed and covered stories on many famous political persons there. Her Interview with Barack Obama before the presidential elections became very popular and earned her much fame.

She later on got the offer from MSNBC channel and she grabbed the offer from both hands to join the NBC TV in the year 2007 and has been working there till now. In NBC TV she worked as a reporter in the beginning and later on co-hosted some popular programs like ‘The Big Picture’ in 2009. She rose to much fame when she started hosting her first solo show with the name ‘News Station with Tamron Hall’. The show became very popular and Tamron was much appreciated by the audiences for her stories and her performances. She covered many criminal stories on the TV and earned the image of a fearless reporter. Later on she hosted other shows also like ‘Today’s Take’, ‘The Today Show’ ‘Deadline: Crime With Tamron Hall’ amongst others.

She had a major incident in her lifetime when her sister was murdered by some criminals and this had much impact on her leading her to join a campaign against criminals with the name ‘Shine a Light’ Campaign. Hall has also won some major awards in the past and has been nominated for the prestigious Emmy Award multiple times in her career.

Hall is socially very active and has got accounts on major social networking sites like Twitter and Instagram. She has got over 2 lacs followers on her Twitter account and keeps on posting her pictures and recent updates on the site. She has got an estimated net worth of close to around $ 5 million and charges a huge sum of money at the salary for the shows and news reporting she does. Her net worth is projected to increase in the future as well considering her present and future appearances in TV shows.