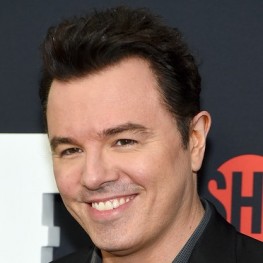 Seth Macfarlane was born in the year 1973 in Connecticut. He is the creator of Family Guy and he started animation in the 1990s. He started the first animated show called Family Guy in the year 1999. It got canceled in the year 2002 but it was opened back in 2005 and it was because of the popular demand. From that time, MacFarlane started other animated series such as The Cleveland Show and American Dad. It was in 2012, when he released the first live action features called Ted and he got picked as a host of 2013 Oscars.

From his biography, his father is called Ronald and worked as a teacher while the mother was called Ann and she worked as academic administrator. While growing up, he liked to watch Fred Flintstone and Woody Woodpecker. He wanted to know more about how animation works when he was only 2 years old. He started to work when he was nine years old and he was publishing a comic strip at local Kent newspaper.

Seth Macfarlane did not stop to draw and to animate while in high school and then attended Rhode Island Schools of Design where he did videos and animation. Even if at the beginning he wanted a career in Disney, he got attention from Hanna- Barbera Production because of the thesis film named Life of Larry. It had the beginning that became a part of Family Guy. After the graduation, he went to live in Los Angeles where he started his career. While working with Hanna-Barbera, he was animator and also a writer for Johnny Bravo and then Cow and Chicken.

While working on these animated shows, his heart continued to be with Life of Larry and he was working on them, trying to fine tune it and to revampe it in the comedy short using Larry & Steve. Fox executives saw the talent of Seth Macfarlane and they give him a job of working at MadTV. After the deal, it opened the work at Fox with Family Guy.

Seth Macfarlane voiced three characters of Family Guy. They are Brian Griffin, Stewie and Peter. The show is a satire about American family and they have a cutting precision about Zany dysfunction on Griffins living at Quahog, in Rhode Island. Even if MacFarlane said that he got idea from Jackie Gleason and Woody Allen, in the end, his brand of humor was seen in the show. After few shows, Family Guy got a loyal fan base especially people who wanted to get a good laugh.

When the show got canceled, it was available on DVD and got big rerun ratings. After complaints from the fans, the show got revived. Seth Macfarlane is not married even if he dated a number of girls. There is no record of any divorce in his life.