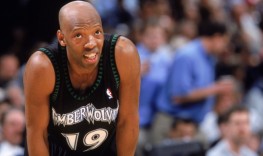 The former professional basketball player, Sam Cassell was born on 18th November 1969. He was born in Baltimore, Maryland. He is of American nationality. He is 6 feet and 3 inches tall. His birth name was Samuel James Cassell Sr. He has a brother named Caron. Sam was born to Donna Cassell. He went to Paul Laurence Dunbar High School. He attended Maine Central Institute. He attended San Jacinto Community College.

Cassell has been married to Tonya Cassell. They are blessed with a son named Sam Cassell Jr. Like father, like son! Sam's son named Sam Cassell Jr is a great college basketball player. Sam Jr is seen to be following the footsteps of his father. He has been playing for the Connecticut Huskies. His son was honored as the NBA All-Star, as he led team Rockets and team Celtics to win the NBA Championship in 1994 and 1995. Sam Jr is seen to be as the new kid in the game who possess a lot of potential to make something of himself.

Sam Cassell is an assistant coach of the Los Angeles Clippers basketball team. He was drafted 24th in the NBA draft out of the Florida State University by the Houston Rockets. He played for eight different teams throughout his career. In 2003-04, he was picked to the NBA All-Star Game. He was also selected to the All-NBA team in the 2003-04 season. Sam used to play the point guard position.

In the year 2008, he won a third with the Boston Celtics basketball team. Cassell led the Minnesota Timberwolves and Milwaukee Bucks, reach the conference finals of the 2001 and 2004 playoffs. He led to the victory of the Los Angeles Clippers in the playoff series in 2006. Sam was well known for his mid-range jump shots, he used to make clutch baskets to help his team win games.

During his senior year in the Florida State University, he recorded 4.9 assists, 18.3 points, and 4.3 rebounds per game and got a win over the Atlantic Coast Conference. He scored 31 points against the Orlando Magic. Cassell was re-assigned with the Nets on a 6 year contract. He recorded 8 assists, 1.6 steals and 19.6 points in 34 minutes per game for the Nets, helping them to win their first playoffs in 4 years.

In the year 2001, he won the Fleer shootout at Jam session, during All-Star Weekend. Sam recorded a career high of 40 points against the Chicago Bulls. Cassell recorded a total of 10,000 points for his career in basketball, during the 2002-03 season. He was honored as one of the 20 greatest players in the Milwaukee Bucks history.

Sam has played for many teams such as New Jersey Nets, Boston Celtics, Phoenix Suns and Los Angeles Clippers. Sam Cassell has earned a Net worth of around $23 million. He got retired from the game in the year 2009. He played 36 games for the Huskies. Sam Cassell Jr has over 4k followers on Twitter. Sam's son has over 5k followers on Instagram.