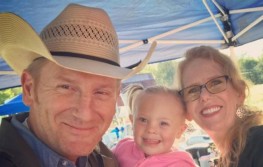 Rory Feek is a popular songwriter of the industry. He is also a well-known singer and is famous for his popular hits among the people.

Rory Feek, born in the year 1965 on April 25, was raised in Atchison in the state of Kansas by his parents. He has never mentioned about any of his parents in the media, neither has he talked about his childhood days. So there are hardly any pieces of information about his early life.

Due to his huge popularity, his personal life is now under the spotlight of the media. Feek was married to Tamara Gilmer but the couple broke their marital relationship after seven years. He got into another marital relationship with Joey Martin Feek in the year 2002 and he also has a daughter with her. Joey Martin Feek passed in the year 2016, on March 4 due to metastatic cervical cancer.

Rory Feek had developed the love for music at a very young age of fifteen. He learned to play guitar when he was fifteen only. Initially, he did some part-time job at the United States Marine Corps. After moving to Dallas, Texas he used to play guitar at the nightclubs. Feek moved to the state of Tennessee to try out his luck with the Nashville entertainment and released his first single, "Someone You Used to Know" as a songwriter, Collin Raye.

Feek signed several other contracts with the other entertainment studios as well as with several popular artists. Feek has also been at the top of the chart when “Some Beach” by Blake Shelton. Feek always had the urge for singing but due to his career opportunities, he never got enough chance to do it.

In the year 2008, Feek, with his wife Joey, appeared in a talent show. The duo was known as Joey + Rory. After achieving the third place in the competition, the duo signed a singing contract with the Vanguard Records. The couple also released a debut single, “Cheater, Cheater” which was listed 30 in the country’s list.