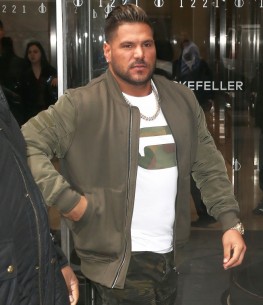 Ronnie Magro is known as an American reality television star. He is most famous for starring in the popular MTV reality series, Jersey Shore which brought the Guido lifestyle into American homes.

Ronald "Ronnie" Ortiz-Magro, Jr. was born on December 4, 1985. Ortiz-Magro was raised in The Bronx, New York by a Puerto Rican-American mother, Constance Ortiz. He had an Italian-American father named Ronald Magro, Sr.

Before joining the world of reality TV, Ronnie worked in real estate development with his father. His business foundation would undoubtedly help with his confidence in making his very own shirt line named "Jersey Laundry".

Ronnie’s muscle-bound incredible looks and cheerful personality became extraordinary fit with MTV's reality TV series, Jersey Shore. Fanatics of the show worship his identity since he appears as the authority of the house that is constantly prepared to protect his loved ones.

Ortiz-Magro made an appearance on TNA Wrestling's Impact Wrestling. The first episode of his pro wrestling journey saw Ortiz and Eric Young get beaten down by Robbie E and Rob Terry, which built to a tag team match the following week. In his debut match, Ronnie pinned Robbie for the win.

Ortiz-Magro started dating Sammi "Sweetheart" Giancola, a fellow cast mate on Jersey Shore, around the start of August 2009. They continued with their relationship outside the house with numerous splits and make-ups. It was reported that Ron and Sammi went on a break due to being busy with different undertakings since they've been home from filming Jersey Shore. Ron and Sammi eventually separated for good and Sammi went on to become engaged with another man.

Magro announced that he and his new girlfriend, Jen Harley were expecting a baby girl on December 26, 2017. Their daughter, Ariana Sky Magro, was born in April of 2018. That same month, it was reported Magro and Harley had ended their relationship. Magro-Ortiz and Harley had confirmed what Us Weekly characterized as an "on-off" relationship when they started dating each other again in early 2019.

Having a baby together linked them forever so they still had some lingering feelings for each other. Since the breakup was still so fresh, they had no trouble rekindling their passion for each other. They want to be in the early stages of their baby’s development and doesn’t want their child to suffer from a broken marriage. They have been speculating to have been back together for quite some time.