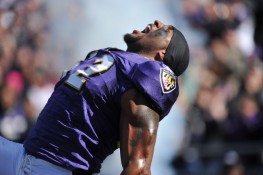 Ray Lewis is a 43 years and 3 months old former American football linebacker. In his entire 17 year professional career Ray Lewis played for only one team, Baltimore Ravens of the National Football League.

Ray Lewis was born on 15th May 1975 in the sunshine state of Florida. Sunseria, his mother, was just 16 years old when she had Ray. His father Elbert was not with them in early age of Ray’s life. Ray was an older among the five children. His birth name was Ray Jenkins. But because of lack of contact with his father he dropped it and took his mother’s boyfriend’s name when he entered in high school. He is an American by nationality and belongs to the African American ethnic background. Initially he attended Kathleen high school and enrolled in the University of Miami later on. He started playing football when he was in the University of Miami.

As per the record Ray Lewis never got married till date. Previously he was in relationships with Tatyana McCall, Kimberly Arnold and Sharnika Kelly. He is believed to be single currently. Ray Lewis is a father of six children. Four boys and two girls named Ray Lewis III, Rayshad Lewis, Rashaan Lewis, Ralin Lewis, Kaitlin Lewis, Diaymon Desiree Lewis.

In Atlanta on 31st January 2000, Ray Lewis was celebrating after a Super Bowl XXXIV at Buckhead Village, where he fought with other people. After that fight two men named Richard Loller and Jacinth Baker found dead. When Ray Lewis, Joseph Sweeting and Reginald Oakley questioned by police, initially Ray gave the statement that he was not at the crime scene which he accepted that it was false latter on. Lewis’s attorneys Ed Garland, Don Samuel reached an agreement with the District Attorney in two weeks of trial. According to which murder charge against Ray were dismissed because of his testimony against other two suspects. After this he was on probation for a year and fined 250,000 dollars by NFL.

In his entire career Ray Lewis played middle linebacker and considered as one of the best player at that position. Lewis was Pro Bowler 13 times and All Pro for 10 times. Ray was one of the few NFL players, to play in a Pro Bowl.

Ray Lewis was passionate about football from his childhood. He was a best wrestler and football player in the Kathleen High School. At the end of his second year in University of Miami he was runner up for the Butkus Award as nation’s best linebacker. Lewis won the NFL Defensive Player of the year twice, in 2001 and in 2003. Ray Lewis was the second linebacker who wins the Super Bowl Most Valuable Player Award.