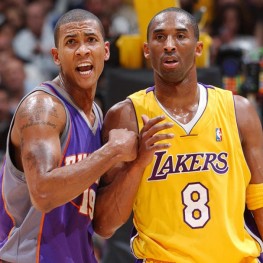 He is 6 feet and 5 inches tall. He went to Ponce De Leon Junior High School. Bell attended Miami Killian High School in Florida. He attended Boston University in Massachusetts. He grew up in Miami, Florida. Bell has been married to his girlfriend Cindy Greenman. The couple tied a knot in July 2004. They have two kids Dia and Tai Brooklyn. They have been living a very happy life.

Raja Bell used to play professional basketball in the NBA for the Dallas Mavericks, Phoenix Suns, Utah Jazz, Golden State Warriors and Charlotte Bobcats. Bell also played for the Philadelphia 76ers. Bell was named twice to the NBA All-Defensive Team in his career. He has been the director of Player Administration of the Cleveland Cavaliers. His position was of a Shooting Guard. Bell signed and played with the Philadelphia 76ers on 16th April 2001.

He was also selected to participate in the 2006 NBA Footlocker three point shootout. Bell also made a career high of 44.2% during the same season. He made a total of 205 three-point shots in the 2006-07 season. Bell signed a $10 million contract to return Utah Jazz on 14 July 2010. Bell got retired from the game on 13th February 2014. Bell owned the NBA Championship with the Cavaliers in the year 2016.

Bell was in India teaching basics of a good defensive stance and shooting drills at Montfort School. He was active in the game from 1999 to 2013. Bell has made around 1968 rebounds, 6998 points and 1208 assists during his entire game career. Bell has earned a Net worth of $10 million and a salary of around $3.24 million. Bell is not very much active on the social media, but has a lot of fan following.