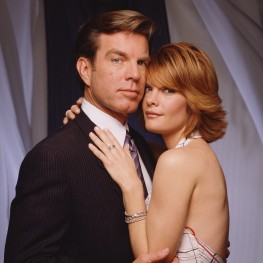 Known widely for the role Jack Abbot, which he plays in the film The Young and the Restless, Peter Michael Berman is one of the high caliber actors in the business and has been nominated and won a number of awards.

Born on the 11th of June 1953 in Guantanamo Bay, Cuba, Peter is considered American due to the fact that his dad, Walter Bergman is American and he served time as an American Navy officer. Peter also for a better part of his childhood grew up in Maryland, USA. For his high school education, Bergman attended Crossland Senior High School located in Camp Spring.

In his biography, a lot is not disclosed with regards to his personal life. Information such as his mother’s name and whereabouts are not known to the public. Bergman is currently a married man and has been so since 1985 when he exchanged vows with Mariellen. The two got married after a year of dating and since then, the couple has welcomed two children; Conor Bergman and Clare Bergman. Before his marriage to Mariellen, Peter was married to Christine Ebersole from 1976 but they parted ways just five years later into their marriage.

In Peter’s imdb profile, it is noted that he auditioned to be part of the All My Children cast and got the role of Dr. Cliff. The show was a hit and got positive reviews. He has also featured in other movies such as The Young and the Restless from 1989. Peter also made a guest appearance on The King of Queens show in 2001.

With an undisclosed salary, Peter has been earning huge sums of money from brand endorsements, revenue and his acting career. Over the many acting years, Peter has amassed a net worth of 10 million dollars.