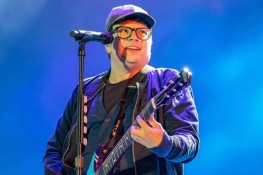 Patrick Stump is a 34 years old American singer, song writer, actor, record producer as well as multi-instrumentalist. He is known as a rhythm guitarist and lead vocalist for the rock band Fall Out Boy. Billboard noted Patrick as one of the popular pop punk celebrities.

Patrick Stump was born on 27th April 1984 in Illinois, United States. He is quit pampered as a youngest of 3 children. In early ages he raised by his father David Stump, a folk singer and mother Patricia Stump, an accountant. When Patrick was 8 years old his parents got divorced. Stump completed his studies from Glenbrook High School, Illinois. He has always been passionate about music, which he believes he got from his father. As growing up his music idols were Michael Jackson, Tom Waits, Nat King Cole, and Elvis Costello, Nat King Cole.

Elisa Yao was Patrick Stump’s long term girlfriend, with whom he got married in 2012. The couple lives together in Chicago. In 2014, on 13th October they had their first son Declan. And in 2016 they had their 2nd child. His children have access to his record collection as they love music too. Patrick Stump sang Let’s Get IT On by Marvin Gaye as the first dance at his half brother’s wedding in 2014.

When Fall Out Boy went on hiatus Patrick Stump lost 65 pounds because of health issues like asthma and pre-diabetes. He also suffered from high cholesterol and high blood pressure. Patrick Stump’s net worth is 15 million dollars.

As Patrick Stump was passionate about music since childhood he played drums in several local bands in Chicago. In 2001 because of mutual musical interest he met Joe Trohman, a founding guitarist of Fall Out Boy who introduced him to bassist Pete Wentz. Patrick originally auditioned as the drummer but later on he becomes the lead singer and lead guitarist for the Fall Out Boy. He is known as the guitarist, primary composer and lead vocalist, of the band.

On October 18, 2011 Patrick Stump released his first solo album Soul Punk. This album has sold 23,000 copies in US as of February 2013. Stump’s solo work has been described as funky and R&B infused. Billboard gave him tag of one of the best voices in pop punk.

Apart from music Patrick Stump also worked as an actor. He was guest star on the television crime show Law & Order in January 2008. He created short film named Moustachette in 2009. He also stared in The Young Blood Chronicles which was Fall Out Boy’s eleven part music video story. After Fall Out Boy announced their return in 2013 Patrick Stump rejoined the group.