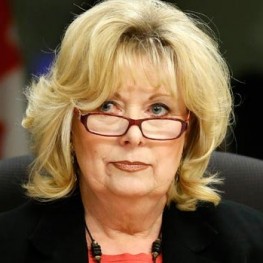 Pamela Wallin is a former Canadian journalist, who started her professional career with CBC Radio's news division in the year 1974. She received more recognition for her work when she joined CTV in 1980 and co-hosted ‘Canada AM’ along with Norm Perry. She later went on to become the Chief of CTV’s Ottawa Bureau. Pamela founded her own television company, ‘Pamela Wallin Productions’ in 1995 and hosted several successful interview programs.

Pamela Wallin, whose roots are originally from Sweden, was born in a small town called Wadena, in Saskatchewan. She completed her graduation in psychology and political science from the University of Saskatchewan and worked her way up to the Canadian Senate in Jan 2009 where she was represented as an independent conservative till May 2013. Recently, in November 2013, she was suspended from the Senate for irregularities with the public funds.

Pamela has written several bestseller books; ‘Since You Asked’, ‘The Comfort of Cats’ and ‘The First Man in My Life’- dedicated to her dad. In her book, ‘Since You Asked’, Pamela Wallin recounts the path through which a small town girl rises to become one of the most prominent persons in Canada’s public life. She recalls many of her involvements in early life some of which are surprising. She mentions about the time around 1968 when marijuana was freely available and she did inhale it at that time; during her teens, when she was an undergraduate in Regina. However, the marijuana and her then boyfriend are links which set her on the journalism path. Her boyfriend got arrested for possession of marijuana and was sentenced to a one year jail term. Pamela maintained the relationship with her boyfriend, even during this period. She used to pay a visit to him every weekend in prison. Her first encounter with the Canadian prison system kindled in her the desire to consider a career in social work. Pamela joined Prince Albert as a community development worker after she passed out of the university and appeared as CBC’s radio guest several times as a student activist. She got hooked on to journalism when CBC Radio, on the basis of her impressive performances, offered her to fill in for a host on leave. She later joined CTV where she got roughed up by the mob in Argentina, during her coverage of the Falklands war from Buenos Aires. The incident brought her closer to her cameraman, Malcolm Fox and they entered into marriage in 1987. Over the years, her marriage with her husband, Malcom turned sour, due to unknown reasons and she ended up filing for a divorce in 1992. During these 5 years, Pamela and her husband had no children, from their marriage.

The pain of a failed marriage did not end here and unhappiness found its way to her professional life too. She ended up messing up with people at her work, and consequently got fired from her job. That was not the end to her miseries as some years later, she was diagnosed with colon cancer, for which she had to undergo a surgery. She bounced back from her tragedies, to find a prominent position in the Canadian Senate in 2009, only to be suspended in 2013 for fraudulently siphoning of public funds. Terming it as a conspiracy by her political detractors, Pamela Wallin is now fighting her way back to the senate. What remains to be seen is whether this dynamic woman would be able to bounce back another time.