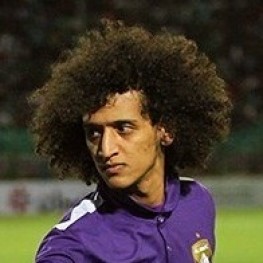 Omar Abdulrahman Ahmed Al Raaki Al Moodi is an Emirati and he plays football as a profession. He is playing the attacking midfielder at UAE Pro-league club called Al-Ain and at UAE national football team. During the year 2012, Omar was ranked at number one by ESPN FC in the list of the Top Ten Asian Players. FIFA had listed him like most promising future stars in Asia.

Omar started to play in the year 2000 and this is when he was on the trial under Al Hilal. In the year 2006, he then joined Al Ain when he was only 15 years old. Omar grew up in the city of Riyadh in Saudi Arabia and in a working-class family. His family descended from Hadhrami of Hadhramaut Governorate. The father also played football. Omar was born with two sisters with three older brothers called, Ahmed, Mohammed and Khaled.

He started to play football when he was still young and he was playing in the neighborhood. When a scout agent called Abdulrahman saw him, he asked him which club he was playing for. Omar told him that he was not playing for any club and had no Saudi nationality. Afterwards, he was given the nationality of Saudi but not his family to join Al Hilal. His father refused. But Al Ain promised to give the entire family citizenship, to move the family to Germany and they come back in United Arab Emirates with full citizenship. Omar with his bothers joined the youth academy of the club.

Omar is a left footed winger and he plays as attacking midfielder. He has the best passing accuracy, ability of setting up for the goal and dribbling skills. He has also good balance skills with ball control. Even if he has a weak physique, he can beat defenders when they meet in one on one situations. Omar can take up free kicks, penalties and corners.

From his biography, his entire family is involved into football. Ahmed Abdulhaman was playing for Masfout but he suffered injury that ended his career, Mohamed plays as forward and Khaled as defender for Al Ain.

In 2013, Omar together with Faris Awad, a sports commentator, they got chosen like The Million Player Competition ambassadors. In the year 2012, Omar signed a contract with Nike. In 2013, he also signed an agreement together with Etisalat so that he can become the ambassador of the brand and he would appear in its public and commercial campaigns and also attend his social causes. He is also an ambassador and appears on the front cover of Middle East Edition for Konami Video game called Pro Evolution Soccer 2016. They appear together with Neymar of Barcelona.

In 2013, he was an ambassador of world cup of FIFA U-17 which took place in Emirates. For his international career, he attended Asian games, AFC Asian Cup, Summer Olympics and Arabian Gulf Cup.