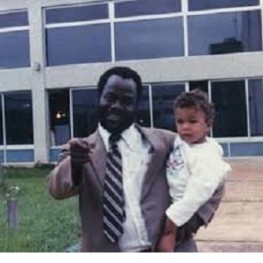 Mobisson, the son of a palm wine tapper, spent his early life in Umu Ezike, Edenta in Awo Idemili, and took admission as a young boy in St. Matthews Primary School, presently known as Pioneer Primary School in the state of Imo. He attended later the Christ the King College in Onitsha. His brilliance in academics attracted the attention of local U.S. Peace Corps volunteers who persuaded and recommended him to pursue his university studies either in the U.K. or the U.S.

He ultimately agreed as he received fellowship from the Nigerian Ministry of Education to join the Massachusetts Institute of Technology in Cambridge. During the Nigerian Civil War (1967-1970), he, being of Igbo descent, associated himself with the Biafran Movement giving way to studies. He left the U.S. in 1981 to help found Africa’s first university of computer technology, Anambra State University of Science & Technology.

His was married, and his wife was Tama, and founded a humanitarian organization named Lifeline for Biafra along with her. There is no record to show that he ever divorced her. He has a son, a hip hop recording artist, named Jidenna. No more details about his personal life are available in any biography. However, he was very passionate about his family, and was never involved in any controversies or rumours.

While working with NITEL, the Nigerian telecommunications industry, he suffered a massive stroke in 1995. It forced him to seek retirement, after which he resided in Noorwood, Massachusetts till his death due to a heart attack on 18th February 2010.

After returning to Nigeria in 1981 from the U.S. where he was studying, he became the founding professor of the Anambra State University of Science & Technology, and served as the head of the Industrial Development Centre (IDC).

In 1983, Mobisson introduced first Black African personal computers and servers, commercially produced. It was a pioneer work in the field of technological development in Nigeria. He was commissioned by the then Governor Jim Nwobodo, and he involved undergraduates as employees for the development of the ASUTECH 800 and 8000 series of PCs (personal Computers).

He continued teaching work at ASUTECH, and while working there, he went to work with NITEL, the Nigerian telecommunications industry. In association with NITL engineers, ASUTECH graduates, and financial assistance of the President Ibrahim Babangida, he produced a communication system that would help connect every single Nigerian through telephones.

Mobisson was later made a chief in Awo Idemili in 2005. He managed to accumulate much wealth during his lifetime, and his net worth must have been huge. However, his exact net worth is not available.