Noah Atwood is popular for being the son of well known YouTuber Roman Atwood.Noah Atwood is a cute, sharp and adorable young boy, he is the oldest son of the famous YouTube star vlogger, comedian, prankster, and actor-director Roman Atwood. His fame peaked when the prank and vlog channel named after him gained popularity.

Noah Atwood has frequently featured along with his father in the various vlogs and videos made by him, the audience has often found him charming and extremely loveable in the various pranks that he has been part of along with his father. Such is his popularity currently that he himself has a sizeable fan base and an ever increasing viewership and fan following. Currently, his social media handles are also showered with love from admirers whenever he uploads joyous, affectionate and hilarious pictures of himself, his father and even his half brother.

Noah Atwood was born on October 18th 2004 as Noah Vaughn Atwood in Ohio, in the United States of America. His father, Roman Atwood is currently dating Brittney Smith and together the couple have a child, a boy named Kane Atwood. Noah Atwood’s mother, Shanna Janette is currently divorced from his father and she had received widespread criticism in late 2015, when she moved to court wanting to ban Noah from being a part of any vlog with or without his father Roman Atwood.

However, a widespread backlash on social media and a hashtag by the name #FreeMyNinjaNoah had surfaced and resulted in the court granting Noah Atwood the permission to be a vlogger and continue making videos once again.

Currently, Noah Atwood lives along with his father Roman Atwood, his father’s girlfriend Brittney Smith and his half brother Kane Atwood. Kane Atwood was born on the 23rd of October, 2011. As of 2017, Brittney is awaiting the birth of her second child and both the siblings, Noah and Kane are eagerly awaiting the birth of the child, who is said to be a girl child, from various sex determination test reports floating in the media.

A great part of Noah Atwood’s childhood was spent facing the camera and he is known to be natural talent at it. He is not only extremely camera friendly, but also known to be a spontaneous performer, something which various members of the audience attribute to his father’s talent. The audience is also known to admire the young boys loveable looks, coupled with his cute, adorable and innocent smile, he is the de-facto star of his father’s YouTube videos.

He has various social media accounts, his Instagram account under the name Gamer Boy Kik has a massive 431,000 followers while he opened two Twitter accounts later in April 2015, they have the handles, noahatwoodvlogs and noahatwood1804, each of which possess a sizeable following, with almost 2900 followers of the former twitter handle. Additionally his non-professional, personal account on Instagram, with the handle noahatwood_ is famous for the personal moment shared by him of his family, including that of his half brother, soon to be step mother and his father. 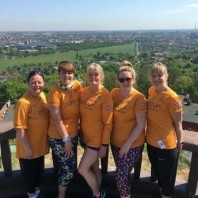