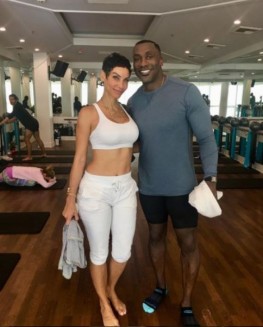 Nicole Michell Murphy, a fashion model and TV celebrity more known as simply Nicole Murphy, was born on 5th January in the year 1968. Her biography began in Sacramento, California, where she drew the first breath in a middle class family of Ellen and Eddie T. Mitchell. Her parents worked as a homemaker and a pilot of the United States Air Force. Nicole Murphy is of a British and African American descent. Nicole Murphy also has three brothers: Darius, Nathan, and Trevor. When Nicole was a child, her parents separated and the mother had to take care of all the children. However, the couple reunited later.

There is no information, however, about the education of Nicole Murphy. Supposedly, she was studying at a local school in Sacramento when she received an invitation to join the business of modeling.

When Nicole Murphy had been just 13 years old, she joined the model business and went on to pursue the career of a model on different contests. A year after it, she won her first international contest of models, which paved her way to the successful career. At first, she signed a deal with the Ford Modeling Agency, an American-based international agency. After working for the agency for a brief period of time, Nicole Murphy received several invitations from the prestigious European agency models.

She naturally accepted and headed to Paris, where she worked for best glamour model agencies. She stayed in Europe for the period as long as 7 years and succeeded to be a model for such houses like Ungaro, Yves St. Laurent, Valentino, Chanel, and a number of others.

Seven years in Europe were more than enough for her, and the model decided to go back to the United States. Instead of pursuing the career of the model further, however, Murphy took a decision to become a designer and a business woman. In 2009, she used her entrepreneurial abilities to launch a jewelry line under the title “FLP by Nicole Murphy”. Following it, she also launched such lines as “Love and Peace” and “aka Friendship.”

After Nicole Murphy had finally retired from the business of modeling, she also became the executive producer of the “Hollywood Exes” reality show, broadcasted by the VH1 TV station. In addition, she has starred in that show. Despite the fact that acting is far from being her main occupation, Nicole Murphy frequently appears in various TV shows.

Considering all her professional activities, it does not come as a surprise that her net worth is currently believed to be $10 million.

In 1988, Nicole Murphy acquainted Eddie Murphy at the show of the NAACP Image Awards. Five years later, the couple got married. Too few facts are known about the life of Nicole Murphy with her husband, yet in 2005 the couple filed for divorce. In 2006 they finally separated.

She became engaged to the former NFL player Michael Strahan in 2009. Yet, the couple announced in 2014 that they were no longer together. The former model has five children with her ex-husband. Nicole Murphy is also highly active on Twitter and Instagram, where she has over 175 thousand and over 379 thousand followers respectively.