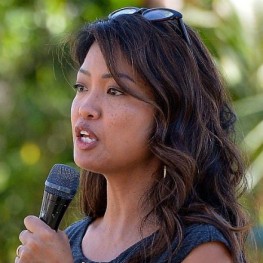 Born on 20th October, 1970 in Philadelphia, Michelle Malkin was raised in the city of Absecon, New Jersey by her immigrant parents Rafaela and Apolo Maglalang. Her real birth name is Michelle Maglalang. Michelle primarily belongs to the Philippine ethnicity but follows Catholic religion. She holds an American nationality.

Michelle Malkin studied at the Holy Spirit Roman Catholic High School before enrolling herself in the famous Oberlin College for higher studies. Michelle took keen interest in blogging since her school years itself. During her schooling, she used to edit the daily school newspaper. She even worked as a press inserter, network news librarian and as a tax preparation aide. Michelle’s very first article in which she censured Oberlin’s affirmative action problem received a derogatory response from her friends but this didn’t stop Michelle from doing what she loved and later on being successful at it.

Throwing some light on Michelle’s love life, it is known to everyone that she began dating her college friend Jesse Malkin whom she met in Oberlin. The two married in the year 1993 and have been blessed with two kids since then. Michelle has never had a divorce. Earlier, Jesse Malkin used to work as an associate policy analyst and economist. He was a very bright student who studied at the Oxford University with a scholarship. The couple used to live in North Bethesda, Maryland but later shifted to Colorado Springs.

Michelle Malkin’s career as a journalist and a columnist commenced way back in the year 1992 when she began working in the Los Angeles Daily News. Ever since, Michelle has changed a lot of platforms to showcase her blogging talent but her skills have still remained unchanged. She began working with the known Competitive Enterprise Institute in the year 1995. Few years later, Michelle shifted to the city of Seattle and began writing for The Seattle Times and for ‘Creators Syndicate’ in 1999.

Apart from blogging, Michelle has earned the spotlight in the field of commentating as well but here she has received both positive and derogatory feedback from the audience. She began working for the Fox News Channel and even hosted ‘The O’Reilly Factor’. Eventually, she has appeared on the ‘Fox News’ and ‘Fox and Friends’ alongside Sean Hannity.

Michelle has also excelled in her life as an author. Her book ‘Invasion’ released in 2002 became a New York Times bestseller. Most of her books have been criticized by the masses mainly due to the bold comments made by Michelle in them.

In her book ‘Defence of Internment: The Case for ‘Racial Profiling’ in World War II and the War on Terror’, she could be seen voicing her racial opinions about the American government’s actions in the Second World War. This book was released in 2004 and was highly criticized by the Asian American civil rights organizations. A highly decorated career lasting several decades has helped Michelle Malkin become a millionaire quite easily. As of now, she has a net worth of $22 million.