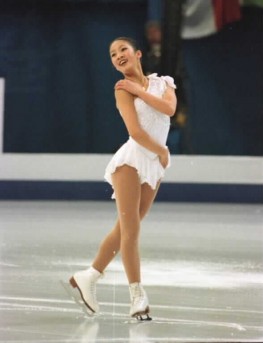 Michelle Kwan is known as a former professional figure skater. She is most famous for being a five-time world champion figure skater and she won a medal twice at the Olympic Games.

Michelle Kwan was born on July 7, 1980 in Torrance, California. She was the little girl of Hong Kong immigrants. Kwan watched her older sibling play ice hockey as a youth. She started skating when she was five, entering and winning her first figure skating competition a year later.

She completed a contest at the eighth spot in the 1994 World Championships at just 13 years old. The performance gained her a spot as a substitute for the 1994 Olympic Games. After her first entry into the Olympics, Kwan started to become a predominant power in the realm of figure skating. She caught the world title in 1996, 1998, 2000, 2001 and 2003. At the Nagano Olympics in 1998, Kwan was favored to win gold, yet wound up with a frustrating silver award when individual U.S. skater Tara Lipinski took an astonishing lead in front of the group.

Before the Salt Lake City Olympics in 2002, Kwan, who was then the dominant world champ, mysteriously fired both her choreographer, Lori Nichol and mentor, Frank Carroll. The gold medal award evaded her when she finished third behind opponent Irina Slutskaya of Russia and U.S. skater Sarah Hughes, who took first. There were whispers that she lost because she no longer had her winning staff behind her.

Kwan kept on contending since her big loss in Salt Lake City, winning gold at the U.S. Nationals and bronze at the World Championships in 2004.

Kwan got engaged to Clay Pell, a White House national security official in 2012. The couple had plans to marry in Providence, Rhode Island at the start of 2013. Many skating stars were among their wedding guests including Brian Boitano and Dorothy Hamill.

After her skating career, Kwan went to Tufts University for a law graduate degree program. She enjoyed a break from her examinations to fill in as a TV journalist for ABC for the 2010 Winter Olympics. She now works in the U.S. State Department's Bureau of Educational and Cultural Affairs. The U.S. State Department named her as public advocacy envoy. Her duties included making a trip to various nations to describe her life experiences to other people.