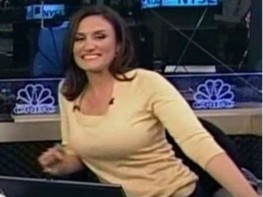 The biography of Michele Caruso-Cabrera, a famous and recognized business reporter at the present time, began in the United States of America, where she drew the first breath. However, neither the exact place, nor the date of her birth is known. And in general, too few facts about her childhood and family are known to the public. Michele Caruso-Cabrera has Cuban (from the mother’s side) and Italian (from the father’s side) roots.

It is not known where Michele Caruso-Cabrera obtained her high school education. However, she obtained a degree in Economics in 1991, when she graduated from the Wellesley College, located in Massachusetts.

After Michele Caruso-Cabrera graduated from the college, she became a non-regular correspondent for the New York Times newspaper. After a short period of time, her career expanded further when she started to work for Univision on the position of a project producer and reporter. Unlike a really brief span of work at the NYT, Michele Caruso-Cabrera acquired a lot of necessary skills and learnt a lot that helped her to advance further. Her abilities were recognized: while working at the Univision, she got an Emmy Award for the TV series on the problem of kids with AIDS.

Another her step in her career previous to joining CNBC was the job at the WTSP-TV channel, which she took on right after quitting the previous channel. Indeed, Michele Caruso-Cabrera spent several years working in Florida for the WTSP-TV and finally got an offer to join the CNBC channel, which she was not able to refuse. She joined the channel in 1998 and displayed her professionalism already at that time.

During the period of more than 17 years of work for the channel, Michele Caruso-Cabrera has covered a number of historic events and was an anchor of several shows. In particular, she was a co-anchor of the “Power Lunch” business program (in 2002-2003), where she has from time to time appeared up to now. The journalist also was a co-host of the “Worldwide Exchange” program, but had to quit the job in 2007. After all, she was involved as an anchor or a host in such TV shows like “Wake Up Call”, “Morning Call”, and “Business Day Programming.” One of the major topics she has covered is the European economic crisis, and she was aired from the biggest European cities like Frankfurt, Madrid, Rome, and Athens.

Moreover, the National Association of Hispanic Journalists awarded Michele Caruso-Cabrera the title of a Broadcaster of the Year in 2004. Up to date, the net worth of the journalist is believed to be around $3 million.

Michele Caruso-Cabrera was married to Paulo Lime. She has not had any children with her husband, and later they decided to divorce due to numerous, frequent misunderstandings and quarrels. In 2015, it became known that the journalist got engaged with someone. However, it is not known who Michele Caruso-Cabrera is dating to.

Publications Indeed, she has not published a lot of books, but one her work has gained enormous attention: “You Know I’m Right: More Prosperity, Less Government” (2010).