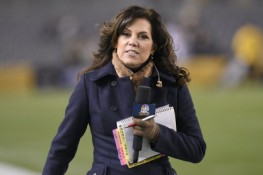 Michele Tafoya came to life on 17th of December 1964. She was named Michele Tafoya Vandersall by her parents who brought her to life in Manhattan Beach located in California. Later, on professional front she chose to be more precisely known as Michele Tafoya. Born and brought in California she did all her studies from this place only. After completing her schooling she went to the University of California in Berkley and proudly finished a degree in mass communication from there in the year 1988. Following it she went on for higher studies from the University of Southern California and secured a master’s degree in business administration in the year 1991.

Michele dreamt of being a TV presenter right from her childhood and took every step for pursuing her dream. She is a known face on NBC sports, but NBC happened to her in the year 2011. Before that she worked on various TV stations, some known and some unknown. Tafoya had keen interest in sports right from her childhood and understood sports, their rules and strategies with minute specifications. Her broadcasting career took inception when she started working for KFAN-AM, Minneapolis. Her job was of a reporter and host for the women’s basketball team of University of Minnesota and Minnesota Vikings. Her biography on Wikipedia reveals that when she started working for the WAQS-AM located in Charlotte, she was the first female analyst at the men’s Basketball in Charlotte. Her coming days brought her work as a sideline reporter in the Midwest Sports channel and as an anchor and reporter in the WCCO-TV located in Minneapolis. She continued the latter for three years.

Tafoya’s major breakthrough in her career was her inception to the CBS Sports channel in the year 1994. There she covered college basketball and hosted a show named as CBS Sports Spectacular. She also covered the U.S. Open for the first time in her career in the year 1994. Moving on as a live play by play reporter of a tournament game of NCAA, she became the first female to do so. For CBS she also hosted NFL and the 1998 Nagano Olympics. Her next stop was the ABC sports and ESPN which she joined in the year 2000. She emerged as a major on-air reporter for these channels. Her reporting included ESPN Monday Night Football and Super Bowl XL. TV shows like the Mike Trico show graced her presence as a co-host. She also covered the NBA games for these channels. In the year 2011 she left ESPN work for NBC sports and since then she is seen on the NBC Sunday night football as a sideline reporter.

Talking about her personal life she tied the knot with Mark Vandersall in the year 2000 and the couple has two children. She earns a whopping annual salary of 200 thousand USD and has done sufficiently well for herself to raise her net worth to 2 million USD. Being regarded as on the most loved TV sports personalities, Michele has been a recipient of the Gracie award by the American Women in Radio and Television.