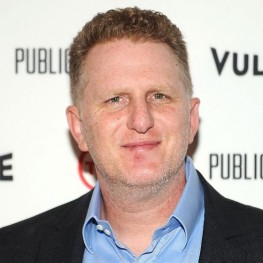 After taking part in the TV show, China Beach, Michael Rapaport’s career has since grown and transformed over the years. He went on to receive lead roles in movies that have received global recognition.

Michael was born in the city of New York to father David Rapaport and mother June Brody. Michael’s dad worked at WKTU Disco 92, a New York based radio station as the general manager. His mom was also a radio personality in the same station. Information from his biography reveals that Michael has two siblings; a brother, Eric Rapaport and an older half-sister, Claudia Lonow. His half-sister was from his father’s previous marriage.

While growing up in Manhattan, Michael’s parents divorced and his mom got remarried to Mark Lonow who was a comic and owner of The Improv with Budd Frieman. Rapaport’s school life was not a walk in the park and during his time at Erasmus Hall High School, he got expelled and joined Martin Luther King High School where he graduated.

Michael is married to his girlfriend, Nichole Beattie who is a writer. The two got married on the 15th of January 2000 and have two children together; Maceo Shane and Julian Ali Rapaport. Divorce claims arose from Nicole’s side but Michael and his wife are still together to date. Before marriage, Rapaport was arrested and charged in court with two counts of aggravated harassment on his ex-girlfriend. Though Michael pleaded guilty on the charges, he was not jailed.

After graduation from high school Rapaport moved to Los Angeles when he was 19years old in efforts of becoming a stand-up comedian. With the help of his stepfather who had knowledge in the field, Rapaport was able to do comedy for three years. His biggest break during his early days came when he landed a guest appearance in China Beach; A dramatic TV series that aired on ABC TV.

According to imdb, Rapaport’s appearance on China Beach landed him a starring role in Zebrahead in 1992. This was then followed by a string of cast appearances in numerous movies and acting alongside some of the greatest actors such as Samuel L. Jackson. Some of the movies and TV shows that Michael has taken part in include; Poetic Justice, Deep Blue Sea, A Stand Up Guy, Fresh Prince of Bel Air, Boston Public and Prison Break. With all these appearances, Michael has been able to gather up a net worth of 12 million dollars

In 2017, Michael took to social media to announce his involvement with Barstool Sports as a journalist for the Pardon My Take podcast. He was fired in 2018 for inappropriate remarks towards their fans base. Currently, Rapaport works as Fox Sports reporter on the BIG3 and also as a narrator with the WWE Network. Aside from acting and reporting, Rapaport is also a director and a published author for his book, This Book Has Balls. Michael has voiced for characters in video games like Grand Theft Auto III and Saints Row.