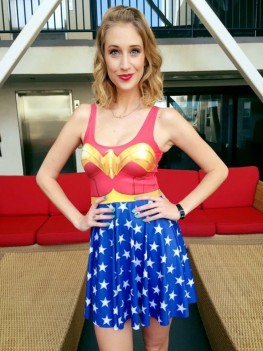 Garrett was born on 6th of March 1986 in Darwin, Australia. She is, hence, an Australian who was bred in Brisbane with her family. The Australian television star and actress aged 33 describes herself as a columnist, writer, MC, an addicted video games player among others. She can be simply described as an interesting and lively personality which justifies her role as a Nickelodeon Australia co-host. She happens to be the niece to minister Peter Garrett, who was once a Midnight Oil frontman. Garrett became known the moment she appeared for the auditioning for new presenters on Channel V in 2005. Although she didn’t win the contest despite being among shortlisted four, she has ever since remained a constant face on television. She kicked off her career in the entertainment world by presenting and hosting the children reality show, Camp Orange for four consecutive times which she began in 2006. Maude also co-hosted Hot30 Countdown for a period of time. In the spirit of adventure, she moved to Los Angeles in the month of January 2013 where she also served as co-host on the show, The Hot Hits Live from LA. Between May 2015 to August 2016, this versatile media personnel also presented YouTube’s SourceFed. This entertainer has been reported to usually introduce herself as the sexy and exceptional TV personnel with the special attribute of bombing photos, hence, a self-acclaimed photo bomber.

It is interesting to know that Maude has been adequately recognized for the achieved feat in her career as she has hosted several live shows, awards, dinners, festivals as well as parties. She was awarded the face of Play TVC and she also got an ASTRA Awards in 2007 for the Most Outstanding Children Program and The Most Outstanding Event. She was also nominated as The Best Female Presenter in 2009 as well as plaudits in the Video games industry in 2012.

Though at the age of 32 and expected to be married or at least in a relationship, this ace entertainer appears to love the single life of freedom. She has neither a husband or boyfriend despite her rumored relationship with Sam Bashor, a co-host, in the month of August 2016, after passionately sharing a kiss on the YouTube channel SourceFedNerd. She was also rumored to be dating an Australian actor and filmmaker named Joel Edgerton. Both parties have refused to debunk or confirm the claim leaving their audience in the dark concerning their relationship status. She is, therefore, not known to be married or dating anyone at the moment.

What is Garrett’s estimated net worth?

Being a single lady who has successfully managed to avoid marital commitments, Garrett seems to derive fulfillment in her chosen career as she derives utmost joy in her vocation. Unfortunately, her net worth is also hidden away as not been made known as she appears to be engrossed in working hard enough to increase her worth and make her efforts worthwhile.