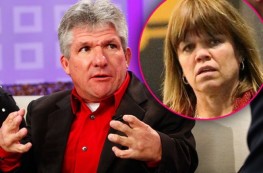 Matt Roloff is also known as Matthew James Roloff, was born in the year 1961. He is a business entrepreneur, motivational speaker, farmer, author and American actor. He became to be well known when he participated in the TLC reality show named Little People, Big World. It was featuring the daily life of his family. Roloff suffers dwarfism, as it was his wife Amy. They have four children and one of them suffers the same problem.

Roloff was born suffering from diastrophic dysplasia. This is a degenerative dwarfism and it caused him to undergo 15 operations when he was still a child. He was born to Peggy Roloff and Ron. They appeared with him at Little People, Big World. They have average height, the same to his sister Ruth. The younger brother called Sam, he suffered diastrophic dysplasia and he uses crutches while working. His other brother called Joshua, he was born with a heart malformation and he died when he was 34 years old.

According to his biography, Matt Roloff has a large family and they all have different heights. There is his wife Amy who also suffered achondroplasia and they have four children: the fraternal twins, Zachary and Jeremy born in the year 1990, Molly and then Jacob. Zach, as his mother, he also suffers Achondroplasia and the three other children are of the right height. Amy and Matt met at a convention called Little People of America. The couple got engaged faster and by 1987 they got married. In 2015, they said that they were already separated and they want to divorce.

Matt Roloff owns a farmhouse of 34 acres in the city of Helvetia in Oregon. They worked together to make Roloff Farm. The farm features a pirate ship, pumpkins, a story tree house and a full sized medieval castle. There are also underground tunnels, mine shaft, volleyball court and a soccer field. The farm has restored barns and outbuildings.

In some seasons, the farm is open to the public, mostly during the pumpkin season. It gets up to 30,000 visitors every year. The farm was expanded when the family bought nearby farm which is 80 acre.

Matt Roloff was extra in Under the Rainbow movie. He also appeared at Ework and in Star War TV movie. He is a friend to Martin Klebba who is also a little person and he appeared in Pirates of Caribbean movies.

Matt Roloff is an author of books and he has written two books. By using a ghostwriter, he authored a book he named, Against Tall Odds: Being a David in A Goliath World. The other book is Little Family, Big Values: Lessons In Love, Respect and Understanding for Families of Any Size. Matt Roloff worked as a president of Little People of America. He is the co-founder and the President of Coalition for Dwarf Advocacy.