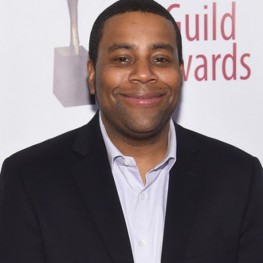 Born on the 10th of may in the year 1978, Kenan Thompson is a comedian and an actor of American origin. Since the year 2003, Kenan has been a member of the cast for the popular NBC comedy Saturday Night Live (popularly knows as SNL). He is one of the longest members to have a tenure in this popular late-night show. In his early years as a teenager, Kenan played as one of the original members cast on Nickelodeon’s comedy sketch series All That.

Kenan has also acted on the popular sitcom Kenan and Kel as a youngster named Kenan Rockmore, in the franchise The Mighty Ducks as Russ Tyler, in the 1997 movie Good Burger as Dexter Reed and also in the 2004 drama Fat Albert in which he played as the lead character. In the earlier stages of his career, Kenan often collaborated with budding comedians, popularly among them, Kel Mitchell. Kenan has also achieved the 88th rank on VH1 Hundred Great Teen Stars.

Raised in Georgia in the city of Atlanta, Kenan was born to mother Elizabeth Thompson and Fletcher Thompson. Kenan had two siblings, a sister who is younger to him and an elder brother. Kenan began participating in acting at the ripe age of fifteen with making a debut in his school play Youth Ensemble of Atlanta (popularly known as the YEA). One of Kenan’s earliest of roles was for the CNN’s “Real news for the Kids” as a young entertainment reporter.

While attending the High School of the Tri-cities which was a Visual Performing and Arts Magnet School in the state of Georgia at East Point, Kenan began filming for his first ever movie, D2: The Mighty Ducks. On 11th of November in 2011, Kenan married a model by the name of Christina Evangeline and the marriage bore a child, Georgia, born in the year 2014.

Kenan Thompson has appeared in several movies which include the Good Burger which was based on All That named on the same sketch and Fat Albert which portrayed Kenan as the lead character. Kenan has also done cameos and supporting roles in movies such as D2: The Mighty Ducks, Heavyweights, D3: The Mighty Ducks, Barbershop 2: Back in Business, Love Don’t Cast a Thing, Snakes on a Plane and My Boss’s Daughter. With fellow actor Kel Mitchell, Kenan has had recurring roles in the Steve Harvey Show playing the Junior.

Back in 2009, Kenan Thompson was a common voice actor for the Fox series cartoon, Sit Down, shut up, playing the role of Sue Sezno, who ironically says no as is evidenced in her surname. The series made a debut on 19th of April in 2009 but had to be cancelled after only four of it’s episodes were aired due to low number of ratings and a number of unfavorable reviews. Kenan dubbed the voice for LeBron James in Nike’s MVP commercials which was shown throughout the entire 2009 playoffs of NBA.