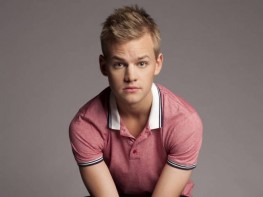 According to a wiki source, this renowned Australian stand-up comedian, actor and television personality aged 28 was born on the 11th of August 1990 in Sydney, New South Wales. He was born to parents who were entertainers, accounting for his chosen career in entertainment. His father, Terry was a model and his mother, Jenny, a singer. Additionally, his father featured in the “Solo” advertisement of 1985 and is also the owner of numerous restaurants in Perth. Although born in Sydney, his family relocated to Perth in Western Australia where he grew with his two lovely sisters.

This stunning and charming actor otherwise regarded as the Acid Tongue Prince and a close associate of Eamon Sullivan is famous for his performances at the Melbourne International Comedy Festival, New York International Fringe Festival, and the Edinburgh Fringe respectively. Creasey graduated from Wesley College in 2007 where he established a newspaper suitable for students which he named The Wesley Inquirer. However, he spent only 3 months at Curtin University where he was studying political science and foreign affairs. He abandoned his study in order to preoccupy himself with his passion, stand-up comedy. He began stand-up comedy at the tender age of fifteen in a competition, Raw Comedy, where he was among the finalists. Although Creasey didn’t win the competition, it didn’t stop him from pursuing his dream as a stand-up comedian and he has successfully hosted comedy shows such as Slumber Party (2010), Political Animal (2011), Naked (2012), The Acid Tongue Prince (2012), Rock God(2014,2015), Poser(2017), Blonde Bombshell (2018) among others.

The talented media personality has also co-hosted shows, functioned as a panelist on several other shows and performed in Melbourne International Comedy Festival Gala, Comedy Up Late and Just for Laughs. Joel is also popular for his roles in the Eurovision Song Contest, Show Me the Movie! as well as the dating game show, Take Me Out. As an actor, Creasey has featured in two television dramas entitled Sisters and Neighbours. With a special skill of telling fascinating stories as well as sustaining a witty conversation, he has been depicted as a captivating storyteller with an excess dose of wit and enthusiasm which keep his audience thrilled and glued to his speeches and presentations. Does Creasey have a girlfriend?

Interestingly, Joel is gay and revealed this trait to his family at the tender of 16. Despite being found attractive and appealing to ladies, he chose to date Jeffery Self for one year between 2014 and 2015. Thereafter, since 2017, he has been reported to be in a new sensational relationship with Jack Stratton-Smith, a model. Hence, the attractive actor has no girlfriend as he is gay.

What is his height?

It is quite unfortunate that his actual height is not known. However, a wiki source placed his height at 557” while another reported 153mm. Hence, the figures are not exactly unifying and cannot be completely trusted. This witty and talented comic star can be followed more intently on his Instagram handle @joelcreasey.