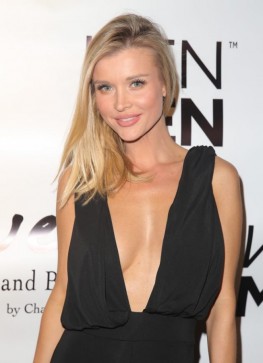 Joanna Krupa is known as a Polish American model, actress and animal rights activist. She is most famous for her appearances on reality television shows like Dancing with the Stars and The Real Housewives of Miami.

Joanna Krupa was born on April 23, 1979 in Warsaw, Mazowieckie, Poland. She is the baby girl of Polish parents Wendy Krupa and Steven Krupa. She has a younger sister named Marta Krupa, who is also a pretty model. She was raised in a Roman Catholic family. Krupa moved to Illinois with her family at the young age of five years old.

For her education studies, Krupa went to Mary Lyon Public School and Steinmetz High School in Chicago. She left her family and moved to Los Angeles at a young age so to pursue her dreams of a modeling career.

Joanna has appeared on more than 100 modeling spreads including Cosmo and Shape. She had the honor of being named the hottest bathing suit model on the planet by mens magazines such as GQ, Maxim, and Playboy.

The adaptable beauty has also guest featured on episodes of Las Vegas and CSI: Crime Scene Investigation. She has been hosting and making show judgements during Poland's Next Top Model since 2010. She contended on Dancing with the Stars in 2009 with five-time champion Derek Hough. Joanna has featured in a few advertisement campaigns for PETA including son questionable promotions. As an enthusiastic animal supporter, Joanna started her very own project called Angels for Animal Rescue.

Krupa had been dating Romain Zago, the proprietor of Miami's most sizzling hot spot, Mynt dance club, for a long time.

In May 2017, Joanna Krupa and Romain Zago split from each other after four years of marriage. When she attended the Cinefashion Film Awards in Los Angeles, she claimed the long distance nature of their marriage was a huge obstacle, “My ex-husband and I did the L.A.-Miami thing but I feel like it’s definitely healthier if two people are in one city. The bicoastal relationship was really tough and I think that really had a lot to do with why we’re not together right now. Traveling from L.A. to Miami and then also traveling out of the country."

Krupa married a businessman named Douglas Nunes on August 4, 2018. They tied the knot during a small ceremony in Poland. They had gotten engaged in March 2018 which was just seven months after her divorce from her previous husband.