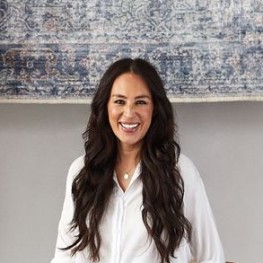 Joanna Gaines is an American television host who was born on April 19, 1987, in Kansas, United States. Although she was born in Kansas, Gaines grew up in Texas with her parents Nan and Jerry Stevens who were of German, Lebanese, and Korean descent. She attended Baylor University in Waco, Texas where graduated with a degree in Communications. Shortly after graduating, Gaines worked with her father helping him with his car business.

Gaines met her husband Chip Gaines who attend the same university and the pair decided to get married in 2013. They went on to have five children named Emmie, Duke, Ella, Drake, and Crew. Her most recent child was a boy who was born in June of 2018. They are currently running their own show called "Fixer Upper" which follows the couple's business renovating homes. Their show has been running for a total of five seasons now with the latest ending in December of 2018. The couple also started the contraction and design business together and named it Magnolia Homes. The business was so successful they opened a discount store called Magnolia Market and a restaurant called Magnolia Table. Gaines and her husband run the businesses from their home in Waco, Texas.