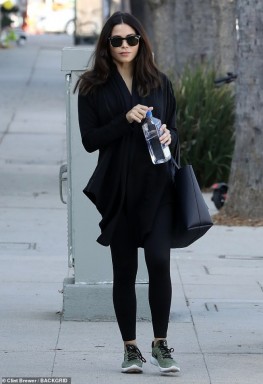 Jenna Dewan is known as a model, dancer and actress. She is most famous for her lead role in the dance film Step Up in 2006. Jenna Dewan was born on December 3, 1980. Jenna Dewan started her performance career by appearing as a backup stage dancer for popular music acts like Janet Jackson and Ricky Martin. The experience prompted her to start working with other pop stars like Missy Elliott, Mandy Moore and Christina Aguilera in their music video recordings.

Jenna’s huge break came in 2006 when she won a lead role in the film Step Up as Nora Clark. Jenna played the love interest of Channing Tatum, whom she'd would end up getting married to in 2009. Dewan found a niche after her break out role. She was the star of another dance themed movie called Take the Lead. She went on to appear in the horror film Grudge 2, as well as other smaller television and straight-to-DVD projects

Dewan has kept occupied in her acting career, working in both film and TV. Her acting resume includes roles in Lifetime's Witches of East End, NBC's The Playboy Club and CBS' Supergirl.

Jenna Dewan was married to famous actor, Channing Tatum for almost a decade. They had initially met when they worked together on the set of Step Up. They had a daughter together during their marriage named Evelyn but they couldn’t keep their love going any longer. They announced that they were ending their marriage on April of 2018.

In a prepared joint statement published by The Vulture, both Tatum and Dewan had nice words to explain their decision, “We have lovingly chosen to separate as a couple. We fell deeply in love so many years ago and have had a magical journey together. Absolutely nothing has changed about how much we love one another, but love is a beautiful adventure that is taking us on different paths for now.”

Despite their positive comments on their separation, they have still become a fixture in the tabloids since the announcement due to what's financially at stake for both parties. With Channing Tatum's net worth standing between $60 to $80 million, the actor has more to lose, depending on whether he and Dewan signed a prenuptial agreement. Since they announcement was positive, it has been speculated that a fair agreement was worked out behind the scenes.