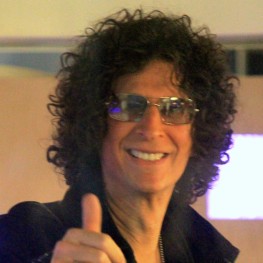 Howard Allan Stern is a successful and famous American radio jockey, TV host, actor and author with international renown. Born to Ben and Ray Stern in Queens, New York City, on 12 January, 1954, the later to become star Howard had his family move to Roosevelt when he was having his first birthday.

Raised and brought up along with his sibling and older sister, Ellen, in the Jackson Heights district of Queens, the extrovert and outgoing Howard was the antithesis of his sister who was relatively on the introvert side, liking to carry out her things quietly. Stern’s father, who had previously served in the US Army before taking up a job as a radio engineer, had a huge influence on the young Howard.

Consequently, Howard was introduced to radio broadcasting by his father. However, his mother first worked as an office clerk but later became a Respiratory therapist.

The family’s relocation to Roosevelt had a lot impact on the young Howard as he was exposed to the great works of the broadcast duo of Bob Grant and Brad Crandall who were working in his father’s recording studio. So, the seed of becoming a broadcaster had been sown in him as early as five during his visits to his father’s workplace.

At New York, Howard completed his studies, having attended Washington-Rose Elementary School before he later went to Roosevelt High School, Hebrew school where he bagged the famous Hebrew name Tzvi. There and then, he attended the South Side High School from where he graduated in 1972 and later enrolled in for a bachelor’s degree course in Communications at Boston University.

While in the school, Howard worked as studio man in the campus radio station. His role in the studio included playing music, casting news, conducting interviews and hosting live shows, the latter being the literal manure that sprout his profound interest in broadcasting. As a youngster, he developed keen interest in playing musical instrument including marionettes and piano. He formed and led the pianist and vocalist session of a band called ‘Electric Comic Book’ alongside his friends.

His first career job with WNTN Network in 1975 —a year before graduating from Boston University— was got on the back of his earning a first class radio-telephone operator license from the Federal Communications Commission. Earlier, he had worked as marketing executive for the New York advertising agency, ‘Benton & Bowels’ before he was moved to a different department within the agency.

His exploit and success at the creative unit coupled with his deep interest in working in a radio station paved way for his premier in the entertainment industry. He worked his way up to direct a four-hour midday shift at a radio station, and grew to become the station’s director of production. His first independent show was with the radio station ‘WWWW’, but later worked with ‘WWDC’, ‘WNBC’ and ‘WXRK’, where he attracted huge listenership and followership, thus becoming a national stir with his television show, ‘The Howard Stern Show’. His work gained a lot of attention while he was with ‘WWWW’ despite that the radio station was not great at the time, and going on to win the Billboard Award for the Album Oriented Rock Personality of the Year in 1980.

His shows ‘The Howard Stern Show’ and ‘The Howard Stern Interview’, with the former premiering in 1986, had a tremendous run for close to two decades before it was finally taken off air in 2005, with close to 25 million listeners’ altogether. Howard published a book titled: ‘Private Parts’, a bestselling chronicle of his exploits as a media personality.

His other shows include ‘The Howard Stern Radio Show’ which ran from 1998 until 2001 and Howard Stern on Demand which lasted for eight years, taking off air in 2013. His great achievement earned his a number of awards including: the Blockbuster Entertainment Award under the category, Favorite Male Newcomer following his role in the movie ‘Private Parts’. He was named the highest paid media personality by Forbes in 2015

Howard was happily married to his long-time Boston University heartthrob Alison Berns and the matrimony was consummated at the Temple Ohabei Shaom in Brookline, Massachusetts on June 4 1978. The marriage was blessed with three daughters, Emuly, Debra and Ahley.

However, 21 years after, Howard decided to live a separate life in the Upper West Side of Manhattan, a decision influenced by work pressure. The immediate victim of such decision was the marriage and he filed for an amicable divorce which was agreed by the couple in 2001. Later in life, Howard had relationship with Angie Everhart and Robin Givens. His final date with television host and model Beth Ostrosky culminated in a marriage in October 2008.