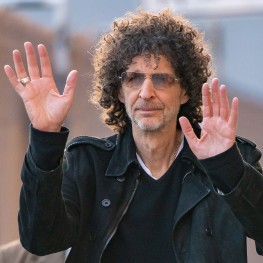 Howard Allan Stern is a well-known American television and radio artist, actor and producer. He shot to fame with his radio talk show The Howard Stern Show. It came under the spotlight when it was broadcasted nationwide on a terrestrial radio during the years 1986-2005. Since the year 2006, Stern has been broadcasting on Sirius XM Radio.

Stern was born on January 12th 1954. He is the second child of Ben and Ray Stern. He spent his very early years in the Jackson Heights neighbourhood of Queens in New York City. His parents are of Jewish background. Stern and his sister Ellen were described to be the opposite faces of a coin.His father was a Recording engineer which inspired him to be in the recording industry. He aspired to be on the radio since he was five.

Stern’s father arranged a microphone, tape machine, and turntable in the basement of their house for him. A few years later, they again shifted to Rockville Centre, and a teenage Stern was admitted to South Side High School which changed him to an introvert.His first wife was Alison Berns. After getting divorced with her, he is now married to Beth Ostrosky.

In 1976, Stern got an offer from WRNW, a rock station in New York. He refused that and started working in a marketing role at Benton & Bowles, a New York advertising agency which he quit within three hours. His next job was of a Radio salesman at Queens which turned out to be a failure too.

Later, he got in touch with WRNW for work and got hired. Months later, he went on to become their production director and later became the program director.Till 1982, he further built his career with WWWW and WWDC. From 1982 to 1985, he worked afternoon shifts at WNBC. In 1985, Stern embarked on a 20-year career at WXRK in New York City. The morning talk show he hosted, began a partnership in 1986 and was aired in sixty markets, engrossing around 20 million listeners at peak times.

Stern bagged a plethora of awards, which include Billboard’s Nationally Syndicated Air Personality of the Year for eight successive years. He is the first to host the highest grossing morning show in LA and NYC. Recently, his photography has been documented in tabloids like WHIRL and Hamptons. He was a member of the jury of America's Got Talent from 2012 to 2015.

Stern loves to call himself the "King of All Media" for his extraordinary success in various fields including radio. He has worked as an emcee and a producer on countless television programs broadcasted at late hours as well. He wrote a couple of books, Miss America and Private Parts, which featured on The New York Times Best Seller list, topped the charts and more than million copies were sold out.

A comical biography movie was adapted from Private Parts in 1997 in which Stern played himself. It broke the American box office records in its first week and made a profit of $41.2 million. Its soundtrack was composed by Stern, which topped the Billboard 200 and won the platinum certification.