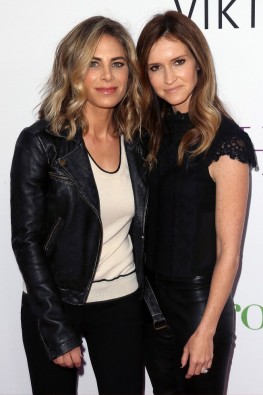 Heidi Rhoades is a former music manager and Yoga instructor who was born in 1982 in the United States. She attended Pennsylvania State University and graduated with a marketing degree in 2002. She went on to become a music manager and collaborated with singer Chantal Kreviazuk. Rhoades also acted as the publicity contact for the band Uh Huh Her. She has become known for being lesbian and proud of it. Rhoades entered a relationship with fitness guru Jillian Michaels in 2009. The couple wanted to start a family and used IFV to become pregnant. The same week the baby boy was born, they adopted a baby girl from Haiti in 2012.

The children's names are Lukensia and Phoenix and are both grown up now. They officially became engaged in December of 2015 and have yet to get married. Rhoades' partner Jillian Michaels is well known for her role on the reality television show "The Biggest Loser" and her own show, "Losing it with Jillian". The couple found a way to make to make their busy careers work while raising two children. While they have yet to become married, both women are adamant about their feelings toward one another and their future plans to tie the knot.