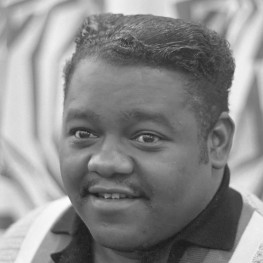 Antoine Dominique "Fats" Domino Jr., also known as Fats Domino, was a singer, a songwriter and a pianist from America. He sold more than 65 million records and was one of the legends of rock and roll of the fifties. Due to his shyness and humility, his success of Top 10 hits between 55’ and 60’ was greatly overlooked.

Born in New Orleans, Fats Domino was the youngest of eight children. His mother was Marie-Donatille Gros (brn. 1886–1971) and father Antoine Caliste Domino (brn. 1879–1964). Antoine was delivered in his home with the help of his grandmother and a midwife. Antoine Sr. played violin and also worked at a racetrack.

After studying up to grade four in Louis B Macarty school, Antoine became an assistant to an ice delivery man. In 1938, he learned to play the piano from Harrison Verrett, his brother-in-law. Antoine married to Rosemary Domino in 1947. She passed away in 2008. Antoine and Rosemary together have eight children: Anatole, Antoine III, Andre, Antoinette, Antonio, Anola, Andrea and Adonica. Despite being so successful, Antoine continued to live in the Lower Ninth Ward, his old neighbourhood until Hurricane Katrina, after which he shifted to New Orleans.

In 1949, Domino signed a contract with Lew Chudd, owner of Imperial Records and received royalties depending on the number of sales. “The Fat Man” was written by Domino and Dave Bartholomew which was a watered-down song “Junkers Blues” which was a portrayal of drug addicts. By 1951, a million copies of this record had been sold out. “The Fat Man” was one of the first records of it’s time to make a sale of that magnitude. Antoine was inducted into the Grammy Hall of Fame.

Along with Bartholomew(co-writer of many of Domino’s songs), Domino released a number of hit songs which included saxophonists like Reggie Houston, Herbert Hardesty and Alvin “Red” Tyler, drummers Smokey Johnson and Earl Palmer. Fred Kemp was the bandleader.

Even though Domino had a contract with Imperial Records, he would often be in attendance for recordings by other artists and labels. Lloyd Prince’s “Lawdy Miss Clawdy” have the memorable introduction of Domino’s rolling piano triplets. It was recorded at J&M studios (owned by Cosimo Matassa) on 13 March, 1952 for Specialty records.

Domino’s “Aint that a Shame” reached the Top Ten and was one of his first record to make the Billboard pop singles chart. In an era of segregation, Pat Boone’s milder cover version received a wider play on the radio. By 1955, Domino earned about a thousand dollars a week receiving royalties and touring, according to the memoir by Chuck Berry. In all, Domino had thirty-seven top 40 singles, though none of them ever made to the number 1 on the pop chart. “Blueberry Hills”, previously recorded by Gene Autryand Louis Armstrong reached number 2 on the Billboard JukeBox in 1956. In 1956-57, the record sold more than 5 million copies.