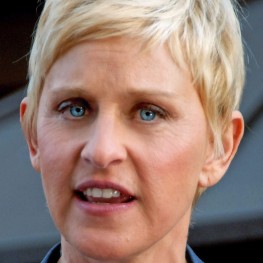 Ellen DeGeneres, born 26th January 1958 in Metairie, Louisiana, USA, has been an American television host, comedian, writer, actress, LGBT activist, and producer. She appeared in the sitcom “Ellen” during 1994 -1998. The sitcom “Ellen” a very popular show and it gave her much popularity. Since 2003, she has also been anchoring the television talk show The Ellen DeGeneres Show. Her comedy career began in 1980s, and starred in the show entitled The Tonight Show Starring Johnny Carson. As an actress she started her career in 1996 when she appeared in the film Mr. Wrong.

She spent her early life at Metairie where she was born. Her father Elliot Everett DeGeneres was engaged in insurance business while her mother Elizabeth Jane was a speech Therapist. She has a male sibling named Vance who is a producer and musician. Her ancestry includes English, French, Irish, and German. In 1974, her parents divorced each other, and later her mother married another man named Roy Gruessendorf, a salesman by profession.

DeGeneres joined Atlanta High School, and did her graduation from there in 1976. However, she got her primary education at Grace King High School in Metairie, Louisiana. She also attended the University of New Orleans where she studied specialization in Communication Studies. She had also been a clerk and waitress during her initial years of struggle.

As for her relationship and sexual orientation, she has been a lesbian. It came out in 1997, and her mother was initially shocked, but later, became her strongest supporter. DeGeneres was depressed as this news stunted her career. However, she came out strong, and maintained a strong relationship with Anne Heche, an actress, and the relationship continued up to the year 2000. She was in relationship with another actress/ photographer/ director named Alexandra Hedison from the year 200 to 2004, but later separated. When the same-sex marriage was legalized in California she married Portia De Rossi in 2008.

Her career may be studied in two parts; one as her film career and the other as Television career. Before that she did stand-up comedy. She started her initial career by performing at coffee houses and small clubs. In the 1980s, she toured extensively throughout the country, and she was declared as the funniest person of the USA in 1984. Her film career started in 1980s to early 1990s during which she performed in a number of films starting from Coneheads. She also acted in a series of the show Ellen’s Energy Adventure. The film had such co-stars as Alex Trebek, Bill Nye, Jamie Lee Curtis, and Michael Richards.

As for her TV career, she started with a sitcom named Open House in which she characterized Margo Van Meter, an office goer. Next in 1992, she acted in another sitcom named Laurie Hill in which she played a nurse. However, the show could not progress beyond four episodes. However, the producers Neal Marlens and Carol Black were very much impressed with the role played by DeGeneres in that show, and they selected her for another ABC Pilot. Her net worth, as per her biography, is estimated at $400 million