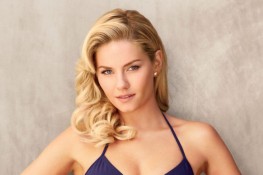 Elisha Cuthbert is regarded as one of the most renowned actress and model of the glamour industry. She is known for her beauty and attitude.

Elisha Cuthbert was born in the year 1982 on November 30. She has grew up in Calgary, Alberta, Canada. She was the daughter of an automotive design engineer and a housewife, Kevin and Patricia respectively. Though she was born in Canada, she has been brought up in Greenfield Park, Quebec. She has also been to Toronto, Ontario before stepping in the acting industry.

As a student, Elisha has went to the Centennial Regional High School. She has grew up with her two younger siblings. She is also a great fan of sports, especially hockey. She also used to maintain an NFL blog website where she used to post her own blogs.

She has been married to the famous hockey player and Captain, Dion Phaneuf. The couple got engaged in the year 2012 and after that, tied the sacred knot of marriage in the year 2013, on July 6. The couple tied the knot at St. James Catholic Church which is located in Summerfield, Prince Edward Island. In the year 2017, the couple welcomed their first child, Zaphire.

Elisha Cuthbert began her career as a model at the age of nine only. She worked as a foot model for many popular clothing brands. Soon after, she made her first appearance in Are You Afraid of the Dark? which was one of the popular horror themed television series for the children. She has also been seen as a host when she hosted shows like Popular Mechanics for Kids, and many more. She has also received an invitation from the popular personality, Hillary Clinton. Cuthbert’s role in the feature film, Dancing on the Moon in the year 1997 was worth a praise.