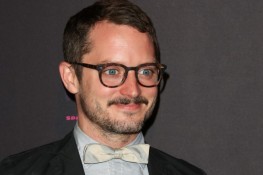 Elijah Wood is a famous American actor, film producer and DJ. He is mostly famous for acting in the leading role of the Academy Award winning film named ‘The Lord of the Rings: The Return of the King’. He worked in all parts of the blockbuster hit film The Lord of the Rings. This famous actor was born on the 28th January in 1981. The place that he was born is called Cedar Rapids which is a place of Iowa in the United States.

Elijah is the second amongst the three children of his parents. His father’s name is Warren Wood and mothers name is Debra wood. He is involved in acting since his childhood. From his childhood he took part in several films as a child artist. At the age of only seven, Elijah started to do modeling in his hometown and also took piano lesson there. Acting since childhood strengthened his acting over the years.

His family moved to Los Angeles only for supporting his career. Before that, he worked as a model and did some TV commercials in his locality. The biography of Elijah is enriched with his wonderful career. Elijah first appeared in the movie named ‘Back to the Future Part 2’ in 1989 when he was on 8 years of age. Then in 1990, he appeared in Internal Affairs. Eventually he started to get important roles in films and in TV series. During his career, he is credit for working in over 90 films and TV productions. The most recent work he has done is in the film named The Trust directed by Alex Brewer and Benjamin Brewer. In this film, he worked with the Academy Award winning actor Nicolas Cage. Throughout his career in movies and TV productions, he managed to get important roles in many popular movies and has been successful in his job. In 2001, he got the chance for playing the lead role in the trilogy named The Lord of the Rings. In the trilogy he played the role of Frodo Baggins. After the first film of the trilogy ‘The Lord of the Rings: The Fellowship of the Ring’ was released, he got enormous reception from critics and audiences. The film was also a huge hit worldwide. Soon after the release of the film, his fame got sky high. Then, in 2002 the 2nd film of the trilogy named ‘The Lord of the Rings: The Two Towers’ released. The final part of the trilogy named ‘The Lord of the Rings: The Return of the King’ was released in 2003 and it was a blockbuster and at also won the Academy Award Best Picture. His net worth is $18 million.

He is a wonderful actor and a nice person. As far as wife is concern, he is not married yet. Though there have been many rumors from time to time about his marriage but he has been in several relationships in different time. He has twitter account with 846 thousand followers.