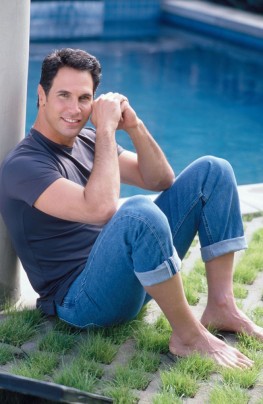 Don Diamont was born on 1962 in New York to his parents Albert and Judy Feinberg. His original name was Donald Fienberg. He later changed to his Donald Diamont, since the maiden name of his mother is Diamont. He has 3 siblings, 2 sisters and 1 brother, being the youngest. Growing up in Los Angeles, he was a very good sportsman in his school days. Cycling and Basketball are his favorite sports.

Because of his good looks, he started working as a model. He continued to work as a model until he got offers to work in a TV show. He joined ‘Days of our Lives’ TV show in 1984. He played the character Carlo Forenza for the TV show. Though he was part of the soap opera for only one year, his acting skills and model looks were noticed by the audiences. He joined the TV show ‘The Young and the Restless’ in 1985. He portrayed the character of Brad Carlton in the show. His character of a smart businessman was very much appreciated by the critics. He continued playing the role of Brad Carlton from 1985 to 1996. He later rejoined the show in 1998 and continued to be a part of the show till 2009. He received lot of recognition, accolades and awards for his character.

After working in The Young and the Restless TV show for almost 25 years, he was then cast as Bill Spencer Jr in ‘The Bold and the Beautiful’ TV soap opera in 2009. The show’s head writer created the character especially for Don Diamont, which role he is still playing. Apart from acting, he also took serious interest in script writing for the TV show.

He also acted as a guest star is some TV shows like Baywatch (1998) and Diagnosis: Murder (1997) and films like A Low down Dirty Shame (1994) and Anger Management (2003). Diamont was listed as No.1 in the list of Sexiest Soap Hunks in 2005. He also appeared on the covers of Playgirl magazine in 1995 and 1988. In 2009, People magazine recognized Diamont as the Sexiest Veteran Actor in Soap Opera Television Shows.

Don Diamont has a net worth of $4 million dollars. He married his girlfriend Rachel Braun in 1994. Together with Rachel Braun, he fathered 4 children. The marriage ended in a divorce in 2002. He later got engaged to fellow actress Cindy Ambuehi. Cindy gave birth to twin boys in 2003. The couple got married in 2012 in Eze, which is a tourist spot in France. His twitter id is @don_diamont, where he updates his fans about his appearances and activities. He identifies himself as a good husband and a proud father to 6 wonderful children.

Apart from acting and modelling, Don Diamont gives donations to charities which help people affected with Multiple Sclerosis, the reason being his niece Alyssa was also affected by the same disease. More information about his biography and TV shows can be found in Wikipedia and IMDB.