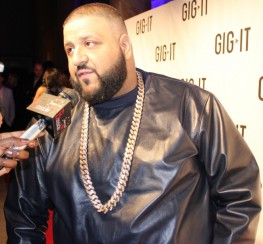 DJ Khaled is a popular American DJ, producer and rapper who has won the ‘Best International Act’ award and the ‘Best Collaboration’ award.

DJ Khaled, who was born on 26th November, 1975 in New Orleans, Louisiana, descends from a Palestinian-Arab family. Although his nationality is American, he has Palestinian roots. His parents shifted to the U.S. few years before he was born. DJ Khaled developed a keen interest in music since a very young age as both his parents were musicians themselves. He credits a lot of his success in the field of music to his parents who were always supportive of his decisions.

DJ Khaled is a married guy and has a son named Asahd Tuck Khaled whom he regularly brings with himself on award functions. DJ Khaled and his wife Nicole Tuck have been in a relationship for over eleven years. Prior to working for DJ Khaled as his unofficial manager, Nicole used to own a clothing brand named ‘ABU Apparel’. Nicole is a business-minded woman who looks after the family as well. She graduated from Manhattan College back in 2003 and then from Fordham University two years later.

Initially, DJ Khaled started teaching disco jockey to himself when he was thirteen. Later when he moved to New Orleans, he started contacting rappers like Birdman and Lil Wayne. Few years later he moved to Miami and it was then when he met Luther Campbell who made him a permanent DJ for ‘The Luke Show’. In no time, DJ Khaled released his debut album called ‘Listennn….the Album’ which was ranked at 12th place in the Billboard list. With this album, DJ Khaled became a popular name in the country which allowed him to collaborate with rappers like Ludacris, Busta Rhymes, Akon, Lil Wayne, T Pain, Nicki Minaj and many others.

DJ Khaled signed a deal with famous producer Jay-Z and released an album titled ‘Major Key’ which reached the first position on the Billboard 200 list. As a result of a number of hit solo albums and collaborations, DJ Khaled has won many awards. He received the ‘DJ of the Year’ award for two straight years in 2007 and 2008. In 2015, he was awarded with ‘Hustler of the Year’ and ‘MVP of the Year’ awards. Today, DJ Khaled is one of the most successful producers in the world which is why he has a net worth of $20 million.