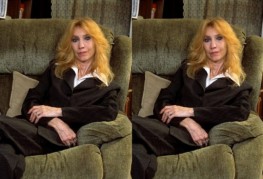 Debbie Mathers is a mother to Eminem, a rapper whose real name is Marshall Mathers. To tell the word about her biography and the life she passed through, she wrote a book called My Son Marshall, My Son Eminem. It was by the help of Annette Witheridge and it sold up to 100,000 copies in UK alone. The book talks about the life of Nelson and the troubles she got through when Eminem was growing up after being married and the divorce from her husband. It talks also about how she was dealing with his son’s fame. However, her story is different from the version Eminem gave and she says he created it to become successful.

With everything he said, Debbie says that she is still happy for his son. In the book, she also talks on how she sued Eminem in the year 2000 because of defamation so that she can stop a foreclosure at her home. Debbie chose to write the book so that she can talk about her story and it was to counteract what Eminem says about her. She says that she is not happy about how she never talked about the truth when Eminem was developing his persona and talking about how his mother was a crazy about welfare.

Debbie Mathers raised Eminem in the city of Warren and in Detroit. However, for some time, Debbie and his son Eminem estranged and they were not seeing each other. It started when Eminem released a song talking about his mother while his mother sued him for defamation. Debbie wrote the book in attempt to reconcile with his son and talking on how she never stopped to love him.

Marshall Bruce Mathers III was born in the year 1972 and it was in Missouri. He is a son to Deborah Rae Nelson also called Debbie Nelson. His father is Marshall Bruce Mathers Jr. His mother passed 73 hour labor to get him. The father left the family and went to live in California. This is where he got other children, Sarah and Michael. While growing up, the family was not staying in one place for a long time and they were moving between Missouri and Michigan most of the time. They lived in Kansas City, Savannah and St Joseph.

When Eminem was growing up, he tried to write to his father but all the letters were returned. Growing up, they were living in the black neighborhood and only three houses of white people were at that block. Eminem was bullied most of the time and his head was injured on many occasions. While growing up, he wanted to be a story teller and to write comic book artist but afterwards, he joined hip hop.

Eminem fought often with his mother and the social worker described her as a paranoid and suspicious person. However, when Eminem become famous, Debbie Mathers was described to be not the best mother.