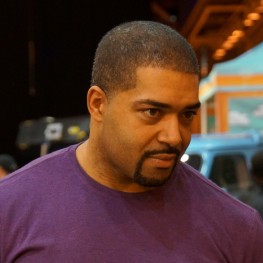 David Otunga is known as an actor and pro wrestling commentator who currently works for WWE. He is most famous for being a former professional wrestler and the ex-husband of popular R&B singer and actress, Jennifer Hudson.

David Otunga was born on April 7, 1980 in Elgin, Illinois. His father Moses was a Kenyan and he had an European American mother named Billie. Both of his parents were educators. He is the youngest of three siblings.

Otunga graduated from Larkin High School to complete his secondary school studies. Otunga earned a four year college education in neuroscience from the University of Illinois. Following his graduation, he moved to New York City, where he became a research center administrator in Columbia University's Cognitive Neuroscience Center.

He then graduated from Harvard Law School in 2006 after passing Illinois' bar exam. Following his graduation, he joined Sidley Austin, one of America's biggest law firms.

After getting a small reputation in the realm of reality TV, Otunga started to catch the eyes of producers. His part on VH1's "I Love New York 2" was entertaining and lead to Otunga getting his big break on WWE’s NXT program. NXT is the WWE’s development program for upcoming pro wrestlers. He did so well on the show that he was promoted to the main roster of the wrestling promotion.

During his wrestling career, he became a multi-time WWE Tag Team Champion. He also became the scripted lawyer for Executive Vice President of Talent Relations and General Manager of both the Raw and SmackDown shows, John Laurinaitis.

The smooth wrestling Superstar even lit up the cinema. He had a role as a cop in the 2013 Halle Berry film "The Call." Otunga's wrestling career was finished after a serious injury, however he still loans his sharp knowledge of wrestling to Raw and SmackDown LIVE as a broadcaster. He is regularly seen on the PPV kick off shows.

Breakups can be tough, particularly if there are charges of abuse as with the relationship between Otunga and his ex wife, American singer and actress Jennifer Hudson.

What is so heartbreaking about the serious allegations is that there is a child caught in between them. David Daniel Otunga Jr. was born in August 2009. The two guardians appear to really care about their son and sole custody has been a strong fighting point during their split.

Accourding to celebritynetworth.com his estimated salary is 10 million.