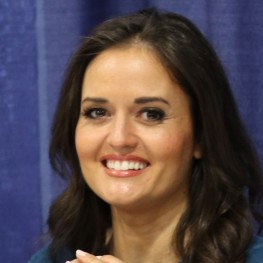 Danica McKellar is an American artist born on 3rd January 1975, in California. She is a prominent actress who played Winnie Cooper in the popular television sitcom “The Wonder Years”. Along with being a consummate actress, she is also an erudite who holds a mathematics degree. She has also authored the book “Math’s Doesn't Suck” and proved a theorem, “Chayes-McKellar-Winn Theorem”.

Born on January 3, 1975, in California to Mahalia and Christopher she developed a penchant for acting from an early age. At the age of 7, her family moved to Los Angeles where she was raised. As a child, she has taken acting classes at the Diane Hill Hardin Young Actors Space. Danica graduated from University of California, Los Angeles and has a BS degree in Mathematics.

Danica’s father was a real estate developer and her mother was a homemaker. Danica’s younger sister, Crystal is also a former child actor who graduated from Yale University. Both the sisters have a commendable academic record coupled with a notable acting career. Danica married Mike Verta in 2009, in California whom she was dating since 2001. In 2010 they had a son, Draco. The couple separated in 2013 due to irresoluble differences. Soon after her divorce, Danica started dating Scott Sveslosky, a lawyer by profession whom she married in November 2014.

As a child, Danica first took acting classes at the Diane Hill Harding Young Actors Space. Her first stints in acting were at the age of nine in television commercials for Mountain Dew and Volkswagen. She has also starred in two episodes of the television sitcom “The Twilight Zone”. She got her first real break on the show “The Wonder Year” where she played the role of Winnie Cooper which was received with great acclaim by television enthusiast.

The Wonder Year’s ran for six seasons from 1988 to 1993. Danica’s sibling Crystal also appeared on few episodes of the Wonder Years. For her performance in The Wonder Years, she also won the Young Artist Award in 1989. After Wonder Years went off air she enrolled in UCLA and earned a BS in Mathematics.

After her break from acting for educational purposes, she returned back to acting as Elsie Snuffin in the television series “The West Wing”. In 2006, Danica also featured in a series “Inspector Mom” in which she portrayed the character of a mother who solves mysteries. Apart from being an accomplished actress, she has also voiced for characters in video games like ‘X-men Legends’, ‘Marvel: Ultimate Alliance’ and ‘Marvel: Ultimate Alliance 2’. Danica has also made several guest appearances in mainstream television sitcoms like “The Big Bang Theory” and “How I Met Your Mother”.

To date, Danica has played over 50 roles as a guest star and has starred in more than 30 movies. Danica has also authored several books published by Penguin books, Girls Get Curves: Geometry Takes Shape (2012), Hot X: Algebra Exposed (2010), Kiss My Math (2008). These books penned with a glamorous flair made math education interesting for teenage girls. For the books, she authored Danica was named by ABC world news as “Person of the Week”.